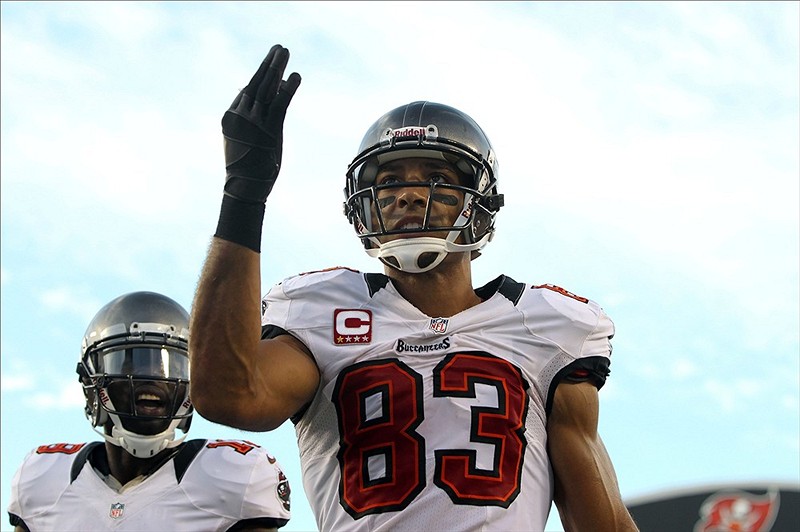 Tampa Bay Buccaneers wide receiver Vincent Jackson (83) reacts after he scored a touchdown against the Washington Redskins during the second half at Raymond James Stadium. Kim Klement-US PRESSWIRE

Tampa Bay is a team of extremes; No. 1 against the rush in the NFL allowing just 77.3 yards per game, but dead last in the NFL against the pass giving up an average of 377 yards per contest through eight games.

Under first year head coach Greg Schiano however they are not realistically in a position to contend for their division title, the NFC South, when Atlanta is 8-0 and shows no sign of slowing down. None the less, the Bucs are prepping themselves for an NFC Wild Card run. The Chargers are yet to find their true identity for the 2012 campaign but the AFC West title is in reach with Denver holding a one game lead at 5-3.

Yet, Tampa Bay enters the on somewhat of a hot streak-as hotstreaks go in the NFL, winners of two straight games after beginning the season 2-4. In Week 8 against Minnesota, Tampa totaled 36 points to the Vikings 17 on the strength of rookie running back Doug Martin to gained 214 total yards of offense. The Bucs put up 416 yards of total offense that day, and quarterback Josh Freeman threw three touchdowns.

Last week against Oakland, Tampa struggled in the first half, trailing 10-7 at the half. The Bucs had little trouble scoring in the second half, putting up 32 second. By the time it was all said and done, Martin ran for 251 yards and scored 4 touchdowns.

Doug Martin may still be in fluke status, without a large body of work, but San Diego does not want to be the team which takes the rookie to Bona fide star in the making. The Chargers have excelled against the run, allowing the 4th fewest yards in the NFL per game, at 87.4. Martin can make people miss and break tackles, and once he's gone its a foot race to the end zone. Martin's four touchdown runs against Oakland went for 45, 67, 70 and 1 yard respectively.

Tampa did allow Oakland to score 22 points in the final quarter-showing its superb weakness against the pass, where they rank 32nd in the NFL.

The challenge for the Chargers offensively will be to find a balance between the run and the pass. San Diego continues to struggle running the ball, and it's passing game is subject to turnovers, coverage sacks and general lack of productivity.

Philip Rivers will have opportunities against a struggling Buccaneers secondary.

"Well they (Tampa Bay) have given up some yards," Rivers said this week when asked if he sees Sunday's game as a huge opportunity the Charger passing game.

"They had a big lead so then Oakland threw it 60 times. When you throw 60 times you hope that you’re going to get some big yards. It’s still a good defense. It’s a young team and they’re flying around all over the place. We’re going to have to play well to win."

You cannot have a Bucs-Chargers preview without mentioning Vincent Jackson, a talented receiver at the center of a contract controversy which ultimately ended with the Chargers electing not to use the franchise tag on him, and Tampa signing him to a five-year $55 million contract last March.

Jackson has done well in Tampa, scoring six touchdowns and with an average of 3.8 receptions per game but with big yardage, totaling 22.9 yards per catch, which leads the NFL.

"Vincent has been really great for our offense, especially for our receivers," said Schiano this week on a conference call with reporters.

"He came into a situation where he is clearly the elder statesman. Other than Vincent, it is a young room. From day one he has been providing leadership, in a work-ethic on the field, work-ethic in the classroom, teaching our guys how to be a true professional. He has been a really fine ambassador for our team in the community. We feel fortunate to have him.”

Chargers corner Quentin Jammer will have the assignment of covering Jackson Sunday.
Look for Freeman and the Bucs to challenge Jammer with deep shots to Jackson.

"He's one of the top five wide receivers in this game," Jammer told the North County Times.

"It's going to be a challenge, but at the same time, it's always a challenge you look forward to because of his ability to make plays. Like I said, I'd rank him right there in the top five receivers of this game. It's going to be matchup that I'm sure he's looking forward to."

San Diego travels east for an early kickoff in Tampa after a 10-day break between games. At 4-4 with a lot to prove in a season yet to be defined, following a dreadful 3-game losing streak and a charity win over Kansas City, you would expect the Chargers to be highly motivated against the Buccaneers.
You must log in or register to reply here.
Share:
Facebook Twitter Reddit Pinterest Tumblr WhatsApp Email Link
Top Bottom