Two Carolina Panthers cheerleaders who allegedly were having sex with each other in a bathroom stall at a Tampa, Fla., nightclub were arrested and charged early Sunday following a run-in with patrons and police.

According to a police report obtained by the CBS TV affiliate in Tampa and the Charlotte Observer, Angela Ellen Keathley and Renee Thomas were arrested following an incident at Banana Joe's, in Tampa's Channelside district, at 2:10 a.m. ET.

In the police report, witnesses claimed Thomas and Keathley were having sex with each other in a stall when other patrons grew angry that the two were taking so long in the bathroom.

Another woman waiting to use the bathroom got into an argument with the two, and Thomas hit that person in the face, according to details of the report posted on TampaBay10.com, the CBS TV affiliate's Web site.

Keathley, who was escorted from the nightclub, was so drunk she could barely stand, the report said. Police described Keathley as rude and belligerent with police.

When Thomas was arrested, she gave police the name of another Panthers cheerleader -- Kristen Lanier Owen, the Observer and TampaBay10.com reported. Thomas, who was charged with one count of battery, might face additional charges for lying to police, once they confirm her identity.

Keathley was charged with disorderly conduct and obstructing or opposing an officer.

The cheerleaders made the trip to Tampa on their own -- the squad performs on the sideline only at home games. Panthers officials at Sunday afternoon's game said they were aware of the report, but declined further comment when contacted by the Observer.

According to the Panthers' official team Web site on NFL.com, Keathley is a registered nurse and second-year member of the TopCats. Thomas is listed as a student at the University of North Carolina-Charlotte and first-year member of the cheerleading squad.
B

I want to be in that bathroom.

Now this is a crying shame. Look at these two, no one had a camara phone? 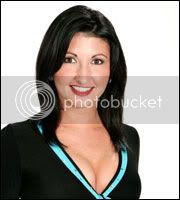 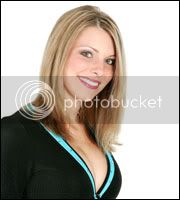 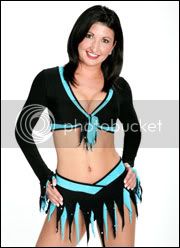 Of all the luck?
C

In recent developments, the Minnesota Viking cheerleaders have requested that both of them be transferred to their team in order to balance the headlines in their state! :ididntdoit:

They should have gotten it on in the men's restroom. By doing that the event would never had been reported.

I'm sure there would have been a lot of photos though. :camera:

Instead of punching the other woman in the face, they should have invited her to join in. :thumbsup1

Check out their mug shots.