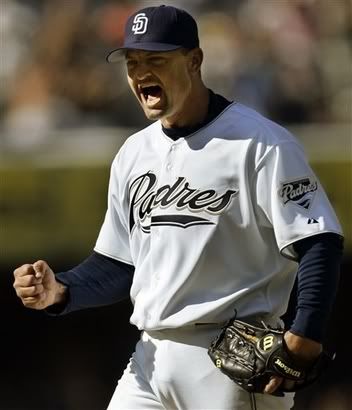 SAN DIEGO -- For nearly 14 seasons, it has been "Trevor Time" for closer extraordinaire Trevor Hoffman in a Padres uniform. And on Sunday, it was time for Hoffman to take his place among baseball immortals.

With 14 pitches and his usual large dose of moxie, Hoffman recorded his 479th save and went into first place on the all-time list ahead of Lee Smith by retiring all three Pirates he faced to close a 2-1 victory that ended the home portion of the Padres' 2006 schedule with a flourish.

He did it with his mother, two brothers, oodles of family members from his wife's side, three little sons and 41,932 clamoring Padres fans on hand at PETCO Park, the downtown yard where the Padres have played the last three seasons after 35 in Mission Valley.

"It was overwhelming," Hoffman said after the game and all the festivities were over. "It's become a very humbling experience. It's been fantastic up to this point. It's hard to put into words to explain what it feels like. It's more than one person deserves."
Hoffman's No. 51 game jersey, the game ball, his cleats, etc., will all be donated to the National Baseball Hall of Fame and placed on display. Hoffman said he would be content with pulling a ball out of the game bag and marking it with the date and save number as his own keepsake.

He doesn't mind. His National League-leading 43rd save kept the Padres 1 1/2 games ahead of the Dodgers in the National League West with seven games left to play.

"That's all I've got, and that's where it all belongs," Hoffman said about shipping the mementos to Cooperstown, N.Y.

This was all made possible when Freddy Sanchez, the National League's leading hitter at .342, was sent up to pinch-hit in the ninth inning after Ryan Doumit struck out looking and Jose Bautista did likewise swinging on a full count.

After taking the first pitch for a strike, Sanchez grounded the ball just wide of a diving Manny Alexander at third, and as shortstop Geoff Blum played it in the hole, Sanchez stumbled on his way out of the batter's box. Blum, thus, had plenty of time to nab Sanchez at first for the record-setting out.

Asked how much of that last play he was able to take in, Hoffman said: "I saw the ball off the bat. I see Manny dive. Expletive, expletive in my head. 'I'm going to have to get the next guy.' Blumer fields it. Comes up. Throws. 'Oh, my. What happened? Thank goodness.' I don't mean it sarcastically. That's just the way it played out in my mind."

With that, what ensued was a deafening roar and a raucous celebration at the mound worthy of a championship clincher. Catcher Josh Bard leapt Yogi Berra-Don Larsen style into Hoffman's arms as the nearly 39-year-old reliever was mobbed by his teammates, who came streaming out of the Padres' first-base side dugout and in from the center-field bullpen.

On the Pirates' side, the players remained in their dugout paying homage, Jim Tracy, Hoffman's long-ago Minor League manager in the Cincinnati organization the year he was converted from a shortstop to a pitcher, standing on the front step. Some offered applause. Some watched the proceedings with respect.

"I've never seen a crowd get into one inning for one guy like that before," said John Grabow, a member of the relief fraternity himself. "You get goose bumps even if you are on the other team."

Hoffman had tied Smith's record in impressive style on Saturday night by also retiring the three Pirates he faced on 12 pitches, thus securing another 2-1 victory. For Hoffman, he reached Smith's nearly decade-old mark by converting five of his six save opportunities in the last eight days, including four on this just-concluded 5-1 homestand.

The weekend sweep of the Bucs was historic by any baseball standards, but even more so in San Diego where the Padres have won only two NL pennants but never captured a World Series title. On Friday night, Chris Young was a double-play grounder away from tossing the first no-hitter in club history when Joe Randa spoiled it with his two-run homer.

Hoffman then became the first Padres player to take the lead on an all-time Major League list in any category by shutting down the Bucs on Saturday night and Sunday afternoon. Tony Gwynn, who played his entire 20-year career in San Diego, had 3,141 hits. Rickey Henderson, who passed through San Diego twice, also recorded his 3,000th career hit with the Padres on the final day of the 2001 season -- Gwynn's last in the Major Leagues.

Hoffman was traded by Florida to San Diego on June 24, 1993, in the deal that sent All-Star Gary Sheffield to the Marlins.
Randy Smith, the general manager back then, was roundly criticized as the team shed most of its high-priced players.
"We got Trevor in the fire sale," said manager Bruce Bochy about that controversial deal. "Some fire sale that turned out to be."

Hoffman, who has recorded all except two of his record saves for the Padres since that trade, knew he had a tough job ahead of him to win the fans over. He was 25 years old at the time.
"Obviously, the greeting that we had back in 1993 was a bit tumultuous," Hoffman said. "You kind of have to expect that when you're the one guy who comes over in the trade and an All-Star is going the other way. There was a lot of animosity surrounding the organization at that time. I knew it was something I couldn't change in a day. I knew fans would respect the way I approached the game and hopefully do a few things on the field to gain their respect."

Nearly 14 seasons later, there could be no doubt of that on Sunday as fans, teammates and opponents alike watched a postgame video tribute to Hoffman on the left-field video board. It's been "Trevor Time" again and again, but never more so than on Sunday with a division title still to be clinched and a lot more games yet to be saved.

I recorded the entire 9th inning and postgame ceremonies in glorious HD! :icon_mrgreen:

Any chance you can upload it??

BFISA said:
Any chance you can upload it??
Click to expand...

Also, here's a link to a story about this historic event and video highlights from ESPN:

It shows the final play for the save and some of the celebration that followed.

This was probably the best game I have ever been to.

Russell Branyan hit a homer over the Beach that tied for the furthest hit at Petco Park. Josh Bard also hit a bomb that set up the save.

Everyone stood up during the entire 9th inning, cheering strikes and booing balls.

First, his teammates surrounded him on the mound.
Then, Channel 4 interviewed Trevor who was humble, saying that he couldnt have done it without his teammates. His family came out and, with the team, watched a great video about how Trevor got to where he is now.

Afterwards, a bunch of people went to the players's exit to watch the guys leave and cheer them on. The Pirates came out first, with their rookies dressed up for rookie hazing.

About 2 hours after game ended, a few Padres came out. Then, a whole bunch of them came out. All the Padres rookies were dressed up as well for the annual rookie hazing. The outfits and guys were absolutely hysterical, as were the veteran players and fans who cheered, clapped and laughed for quite awhile. The rookies signed autographs for awhile, whilst dressed up, then they herded them back into the bus and hauled them off to the airport to cheers.

Then, we headed off to the Gaslamp for champagne. Doesnt get better than this...TREVOR IS THE MAN!!!

They take awhile to download, though, so if you want it you better have a high speed connection or a heck of a lot of time on your hands.

Channel 9/51 is now showing the Trevor Saves Career video that they showed after the game onn the Jumbotron at Petco...

What a great thing for Trevor, the Pads, and the city!!

BFISA said:
What a great thing for Trevor, the Pads, and the city!!