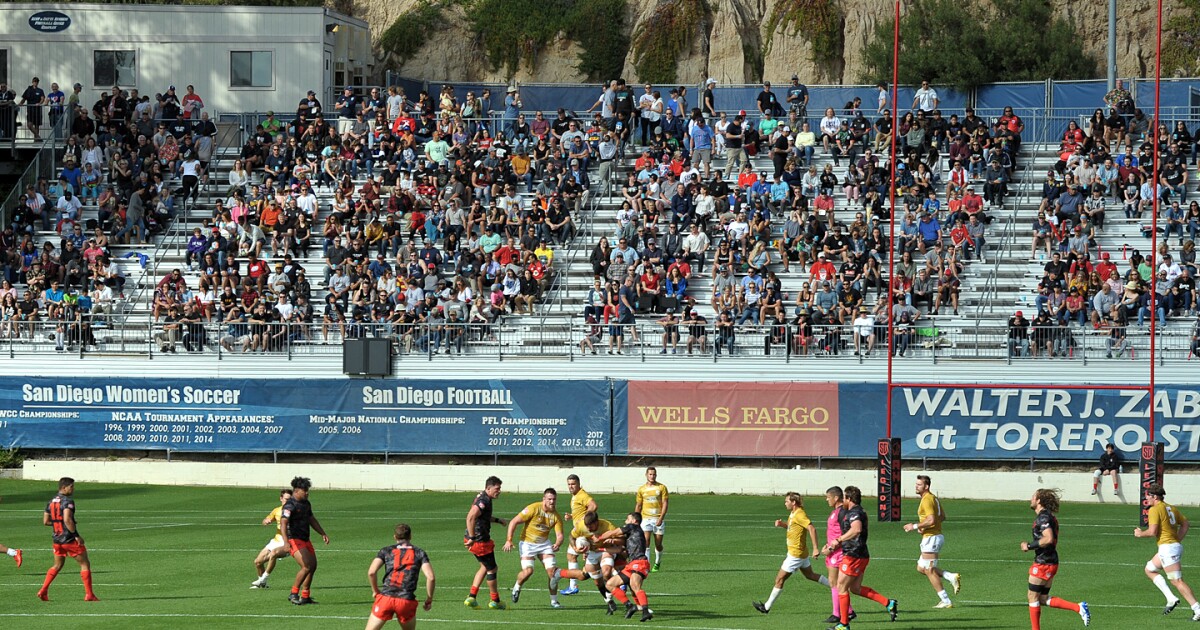 Landon Donovan will be the team's general manager, and maybe its head coach, too.

Three days after one San Diego professional soccer team played its first home game, another is set to take the field sooner rather than later.
The expansion franchise of the second-division United Soccer Leaguewill announce Tuesday night it is playing in March 2020 instead of 2021 at what it hopes will be an expanded Torero Stadium at USD. It hardly comes as a surprise; the club is finalizing a rent agreement with the university and said last week it is hiring 20 positions in its front office.
“I’ve started a number of franchises, and it’s always best to have more time,” said club founder Warren Smith, who has worked in both minor-league baseball and soccer. “But this region has been through a lot and we recognize that, and I think it’s fair to do everything in our power, like we said we would, to deliver in 2020.
“It’s mainly because we’re listening to our fans. We asked them in every meeting and all of our online surveys what they wanted, and all of them wanted it to be 2020. … That’s only six months away, so we’ve got a lot of work to do.”
On Tuesday night, they’ll start taking season-ticket deposits.
By the end of the month, Smith hopes to introduce the team’s principal owner. In mid-October, the team’s name and crest. In December, local tryouts. In January, a roster. In February, exhibition games. On the first weekend in March, the USL season opener.
Perhaps the most intriguing announcement could come next month, when Smith hopes to sort out the head coaching situation.
The general manager is Landon Donovan. The coach could also be Landon Donovan.
The U.S. national team’s all-time leader in goals and assists has hinted he’s interested in doing more than overseeing the club’s soccer operations, despite never having coached at any level. There’s also the issue of a coaching license from U.S. Soccer, and Donovan reportedly attended a five-day session in Texas last month to secure his B license (as a former professional player, he is exempted from acquiring lower-level licenses first).
So might Donovan hire a coach with no experience (himself)?
“That’s the conversation we’re having internally, to be brutally honest, and it’s not one we’ve answered,” Smith said. “There’s a lot of ifs to that, and we have to work through the thens. I like him a lot as a human being, and frankly I’m really excited to have him on the team side no matter what. It would be great if he could be the coach, but we still have work to do to put that in place.”
Also on the to-do list is stadium expansion. Torero Stadium currently seats 5,700, and Smith admits that an optimal USL venue “from what we know about the market and all the research we’ve done” is more like 12,000 to 15,000.
“We won’t be able to get to that,” he said.
The target is 8,000, which might mean putting seats in the open end behind the west goal. In 2001, when the WUSA women’s pro league spent $3.5 million expanding Torero Stadium from its original capacity of 3,000, it hoped to add seating on the remaining three sides to bring it to 7,100.
They were able to construct permanent seating on two additional sides, but San Diego Gas & Electric nixed plans for an 876-seat bleacher complex behind the west goal for safety reasons, with a 138-kilovolt power line above and a gas pipe below. “It was our assessment after examining all the evidence,” an SDG&E spokesperson told the Union-Tribune at the time, “that it was an unacceptable risk to the people in the stands.”
That left capacity at 6,200, and the removal of temporary bleachers has since dropped it to 5,700. Smith said an architect is scheduled to evaluate structural options this week.
Using USD also means scheduling around the university’s football and soccer teams, particularly from late August through November. The San Diego Legion, a pro rugby team, plays there as well in a season that runs from February to June.
Athletic Director Bill McGillis said USD’s teams will have priority but there are enough dates to accommodate everybody. A bigger challenge, he acknowledged, might be maintaining the condition of Torero Stadium’s natural grass field given the increased traffic.
“We believe in San Diego long term and are ready to tackle the next issue, and that is what is the right way to provide a venue for the region,” Smith said. “There are a lot of things that are happening right now. You have SDSU looking to build a stadium that could or could not work, we don’t know. We continue to have conversations with them.
“We’re looking at some other opportunities as well. We have some ideas but they’re just that. Right now, our focus is let’s just get to opening day.”
They won’t be the only pro soccer team in town. 1904 FC, part of the new third-division National Independent Soccer Association, drew an announced crowd of 3,028 on Saturday for its inaugural home game. NISA is holding a six-game “showcase” through November, followed by a more traditional season in the spring.
“The more soccer we have, the more chance fans have to interact and get to know the game,” Smith said. “We have a pretty strong foundation of love, support and knowledge of the game in the community. The more avenues, the better. Choices are the best thing for the customer, right?”
You must log in or register to reply here.
Share:
Facebook Twitter Reddit Pinterest Tumblr WhatsApp Email Link
Top Bottom