Rosario and Rivers make a connection in win over Titans 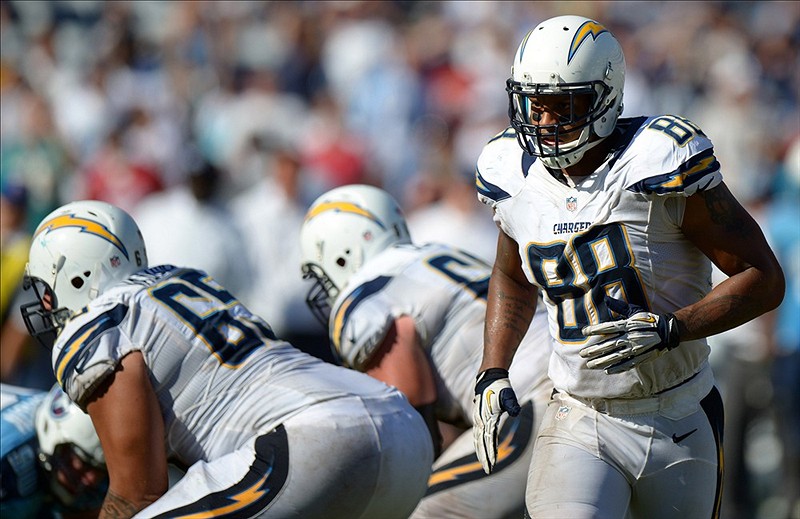 It has been said the true mark of a great player is what happens around him.

Under constant pressure, Philip Rivers threw the ball to backup tight end Dante Rosario four times and three of those passes resulted in touchdowns (11, 4 and 15 yds).

Rivers has taken a good amount of criticism in his nine-year NFL career, some of it deserved, but Sunday he was at his best.

He was a perfect 4/4 when relying on the backup who found himself on the field after Antonio Gates was a game-time scratch because of a rib injury.

"All three of the touchdowns he threw me today, the ball was in perfect location," Rosario said via the Chargers official website.

"What he’s doing in the back, he’s probably looking people off but as soon as I get my head around, I’m looking for the ball. All three of those passes were in places where the defender couldn’t get it. "

Sunday could give new life to Rosario's career. His road to San Diego has been anything but easy. The 6-4, 250 pound Rosario was a fifth-round pick by Carolina in 2007. He played four seasons (2007-10) for the Panthers and played in Denver in 2011. He played in 14 games for the Broncos last season and became a free agent. He was signed by the Chargers last March to compete for a roster spot as a third tight end. Rosario's mother died of cancer in December of 2001 after a 10-year battle.

Prior to Sunday, Rosario had not caught a touchdown pass since September of 2009 as a member of the Carolina Panthers.

"Dante, the first time I ever threw him the ball, the first thing I noticed was how easy he was to throw the ball to," said Rivers.

"And what I mean is he's just very smooth. He's kind of a steady one speed guy, I mean he's fast but there's not a lot of start stop with him he's just smooth and steady the big target."

Rivers finished with a 119.8 quarterback passer rating on 24 of 32 passes for 284 yards with 3 TDs and an interception in a 38-10 dominating win over the Tennessee Titans which moves the Chargers to 2-0. He was sacked four times, but that number could have been higher.

Overall, the veteran Chargers quarterback played outstanding. He played the type of game which gives clear evidence that his talent level is among the elite NFL quarterbacks. Consistency has obviously been an issue but Sunday his ability to find a receiver while under pressure, along with an equally dominating Charger defense, won the game.

Rivers said that the Chargers at this point, compared to last season, are in a much better flow and there is a better feel in the locker room. He said the team if full of guys who love to play the game and can't wait to play the game on Sunday.

"The exciting thing about this offense, that I've always loved, is that is every week, 'Who's going to be the guy?'" Rivers said.

"And that's what I think helps create an unselfish group that helps keep everybody ready."
B

Having a QB like Rivers to throw to you is a dream scenario for a lot of receivers.

I wonder if VJ is kicking himself yet in choosing to go to Tampa...
B

Concudan said:
I wonder if VJ is kicking himself yet in choosing to go to Tampa...
Click to expand...

Meh - he had a pretty productive day yesterday in TB. and the decision wasn't made in a vacuum - I think he knew that it was probably best to move on.

Travis Duncan said:
Rosario's mother died of cancer in December of 2001 after a 10-year battle.
Click to expand...