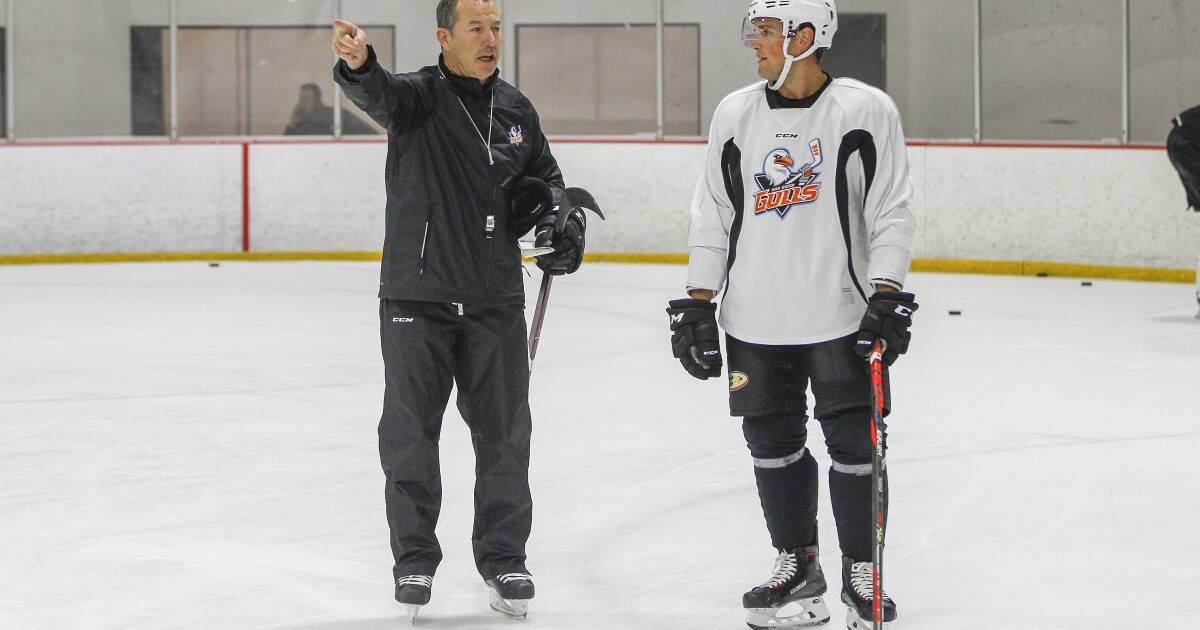 When Andrew Poturalski entered free agency after helping the Charlotte Checkers capture the Calder Cup last spring, the 25-year old winger cast his eyes west, and not just because he had a hankering for fish tacos or an interest in taking up surfing.

In four seasons under coach Dallas Eakins, the Gulls established a reputation for winning hockey, creating a great home atmosphere at Pechanga Arena and developing players for the NHL Anaheim Ducks.

Eakins has been promoted to coaching the Ducks and Kevin Dineen will be leading the Gulls in his place when a new season opens tonight at Bakersfield.

However, the overall organizational goal remains the same: Compete for a Calder Cup and give San Diego sports fans an exciting product in the old building on Sports Arena Boulevard while continuing to sharpen prospects’ skills for possible NHL promotion.


“They give guys the opportunity to move up,” said Poturalski, who scored 23 regular-season and 12 postseason goals for Charlotte. “Everyone’s goal here is to play in the NHL and that’s what everyone’s working for. You know that if you play hard and do the right things, that’s rewarded and you get a chance to play at the next level.”

Dineen, whose hockey resume includes 19 NHL seasons as a player and coaching stints with the Portland Pirates, Florida Panthers, Team Canada’s women’s national team and the Chicago Blackhawks, will guide a mix of experienced veterans and fresh-faced youngsters.

A year ago the Ducks and Gulls led their respective leagues by having 25 players appear in a game for both teams. The youth movement going on under Eakins in Anaheim, where the Ducks opened their season Thursday night with a lineup stacked with recent former Gulls, could result in more of the same this year.

Several young Ducks are on two-way contracts meaning they can be sent down at anytime without passing through waivers.

Forward Daniel Sprong, who scored 14 goals in 47 games for the Ducks after coming over in a trade from Pittsburgh last season, will start the new campaign with the Gulls after passing through waivers earlier in the week.

Prime Ducks prospects Simon Benoit and Josh Mahura will anchor a defensive corps that features several new faces including Jani Hakanpaa, who comes over from Finland and Chris Wideman, who had an especially interesting journey last season seeing NHL action with Ottawa, Edmonton and Florida as well as AHL Springfield and Wilkes-Barre/Scranton.

A three-game preseason and extended camp in Anaheim means Dineen had a relatively short window to shape lineups for the opener and key contributors to last season’s squad like Kalle Kossila, Adam Cracknell, Keaton Thompson and Andy Welinski have moved on.

By the time the Gulls open the home schedule Oct. 18 against Stockton, the Ducks will have played seven games, San Diego will have played three with a bevy of practice time in between and the entire organization will have a much better concept of what the coaches are working with.


“I like to think that one thing that’s not going to be a challenge for our team is producing offense,” Dineen said. “We have some high-skilled players out there and that’s exciting from a coaching perspective but in saying that, I’m a big believer that you take care of business in your end, in the defensive zone, it makes for a good team. That’s the area of focus right now and through this weekend.”

Bakersfield won the seven-team Pacific Division last season and returns with pretty much the exact same roster so the Gulls know what to expect. San Diego ended Bakersfield’s season by taking the Pacific Division Finals in six games.

“A lot of familiar names,” Carrick said. “Obviously we know them well and we pretty much know every team in our division well by this point. They’re going to be a fast team, gonna be quick. Ton of skill. We’re going to have to be on our toes defensively for sure but looking around our room, I like our team as well. It’s going to be a good matchup.”

Hey Ray -- The Gulls play Grand Rapids on Wednesday, 12/11. I'm probably back in So Cal that week, you in for a game?

Maybe let's get a few of the local crew together for a guys' night out.
Reactions: SDRay

RamAirVA said:
Hey Ray -- The Gulls play Grand Rapids on Wednesday, 12/11. I'm probably back in So Cal that week, you in for a game?

Maybe let's get a few of the local crew together for a guys' night out.
Click to expand...

That would be great to go to a game together. Anyone else want to meet up? Conc?

SDRay said:
That would be great to go to a game together. Anyone else want to meet up? Conc?
Click to expand...

Update -- how about November 13 against San Jose? I'm in OC that week.
Q