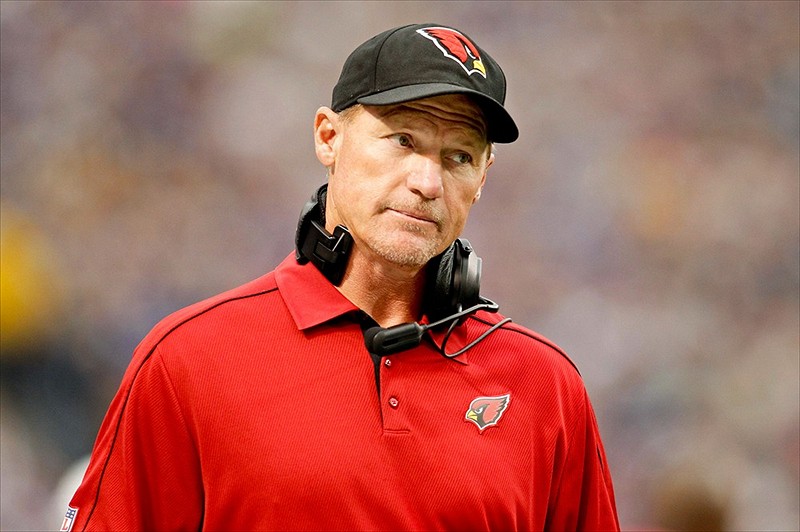 Arizona Cardinals head coach Ken Whisenhunt looks at a referee about a call in the game with the Minnesota Vikings at the Metrodome. The Vikings win 21-14. Credit: Bruce Kluckhohn-USA TODAY Sports

The most prominent name to join the Chargers coaching staff is Ken Whisenhunt-even more so than head coach Mike McCoy in terms of name recognition.

It's easy to forget that, under Whisenhunt, the Arizona Cardinals went to the Super Bowl in 2009. Yes the Cardinals, a franchise mired in mediocrity, were in a Super Bowl-that alone should keep him in the business for a long time-and obviously says something about his talent as a coach.

Whisenhunt will be the offensive coordinator under McCoy, a role he flourished in while in Pittsburgh with the Steelers before getting the head gig in Arizona. Whisenhunt didn't do bad with the talent assembled in Phoenix, but some guys are better coordinators than head coaches, as the Norv Turner era in San Diego proved.

The question is who is going to "fix" Philip Rivers? (if you believe he needs fixing)

Will it be Wisenhunt or new quarterbacks coach Frank Reich? Or is that the job of head coach Mike McCoy, a former quarterback himself

Whisenhunt had this to say about the opportunity ahead of coaching Rivers.

"Well I’m excited about the chance to work with the quarterback," said Whisenhunt.

Also joining McCoy's staff is Fred Graves, most recently of the Carolina Panthers. Graves has bounced around the NFL since 2000 as a wide receiver coach. He had the same position at the University of Utah from 1982-2000.

Defensively the Chargers coaching staff mostly remained in tact, with defensive coordinator John Pagano keeping his job. Ron Milus has joined the staff as the secondary coach, having served in that same position with the Broncos last season.

The consensus going into April's NFL draft is the Chargers need to build up the offensive line. It's a position where they are practically starting from the ground up, so multiple picks could address that need.

After the offensive line the Chargers could look at wide receiver.

A mock draft posted on the Union Tribune website has the Chargers using the 11th overall selection on Jake Matthews, an offensive tackle who was a junior at Texas A&M last season. He is the son of Hall of Famer Bruce Mathews.

Mel Kiper of ESPN has the Chargers selecting offensive tackle Eric Fisher out of Central Michigan.

Finding a backup or potential long-term replacement for Philip Rivers could also be addressed in this draft.