Linebacker Shawne Merriman has drawn plenty of attention during the San Diego Chargers offseason workouts for his larger and more imposing physique. "Scary" is one word I've heard used to describe the way Merriman looks, especially with his shirt off. He has added 10 pounds of muscle while ridding himself of a significant amount of fat. He still appears to be as fast as he was in 2005, when he won The Associated Press NFL Defensive Rookie of the Year award and made the Pro Bowl as a starter. He also has worked with a boxing instructor to improve his hand work and endurance, and has studied a considerable amount of videotape while seeking to upgrade the weakest part of his game -- pass coverage. Even scarier than how Merriman looks is how he sounds when discussing what he expects from himself on the field during the 2006 season. "I don't think I played that well (last season) compared to what I can do," he told the San Diego Union-Tribune. "I'm going to be a lot better this year. It's not even going to be close."
Click to expand... 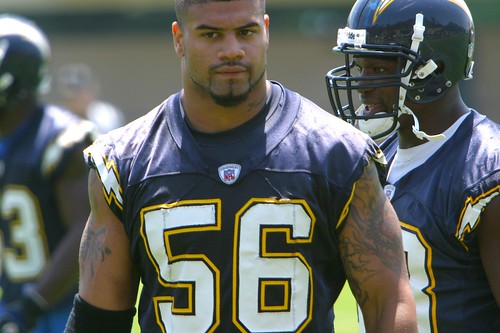