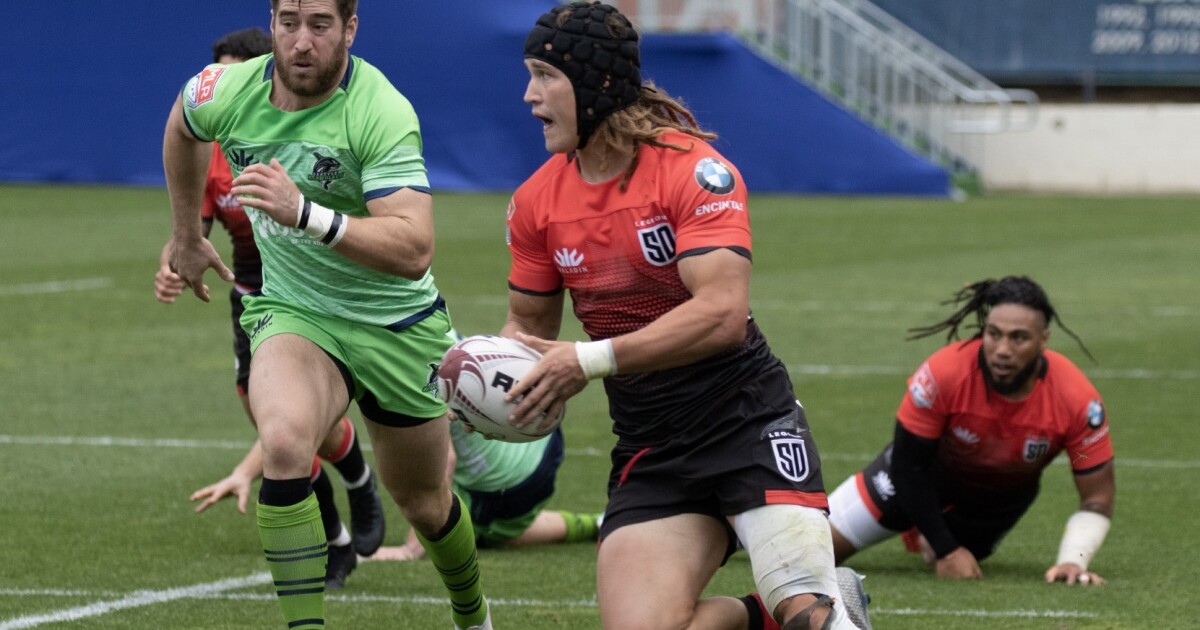 San Diego avenges 2019 finals loss to Seattle with 33-24 victory in opener at home
It was a highlight so good, so indicative of what the San Diego Legion might be able to do in attack this season, other teams in Major League Rugby might shudder watching it.

In the opening minute of the second half on Sunday against defending champion Seattle, Ma’a Nonu — the Legion’s newly acquired former star from New Zealand’s All Blacks — motored down the right flank, and just as he was about to be tackled, he swung a rocket of a pass to Save Totovosau near the sideline.

Still 30 meters from the goal, the 6-foot-5, 219-pound Totovosau ripped through the grasp of a couple of defenders and burst in for a try that gave the Legion a 16-point lead in their eventual 33-24 victory in front of announced crowd of 2,500 at Torero Stadium.

The Nonu-Totovosau play was the kind of explosiveness that the Legion were hoping to produce with Nonu, the 37-year-old two-time World Cup champion, though his new fans got to witness the big man’s nuanced skills, too.

“He didn’t have any breakout carries, but he’s a run, pass and kick threat,” said Legion head coach Rob Hoadley. “He was distributing the ball well to other people in space. He opened it up for Save’s try, though Save still had a lot to do (once he got the ball).”

Nonu also set up the last try of the match for the Legion that gave them 33 straight points scored after Seattle went up early 10-0. He deftly distributed outside to Dylan Audsley, who then pitched inside to Jasa Veremalua, and the Fijian rumbled in for the score.

Said the Legion’s American scrum half Nate Auspurger of the first experience playing with Nonu, “Everybody looks at his physique and the way he carries the ball. But the guy is unbelievably skillful. He’s able to kick, pass, and do all of those things that it takes to be an All Black.”

Fly half Luke Barton, a first-year addition to the Legion from Australia, scored eight points by going 4-for-5 on conversions. He has taken over the kicking duties from one of the Legion’s staples of the past two seasons, Joe Pietersen, who didn’t suit up for the match.

“We squeezed the life out of Seattle in the first half,” Hoadley said of 19-10 margin the Legion took into the break.

Hoadley, however, was far from pleased with the final 20 minutes, when San Diego allowed two scores and got sloppy with seven penalties given away.

“We shot ourselves in the foot against a team that wasn’t doing anything against us in attack,” Hoadley said.

The match ultimately ended brightly for San Diego, which got a great defensive play from sub Devin Short to prevent Seattle from scoring in the closing seconds. The stand denied the Seawolves from receiving one match bonus point each for getting at least four tries in the game and coming within seven points of the winner.

Instead, the Legion earned a full five points (four for the win, one for four tries), while Seattle got zero — a nice lead to start with in their West Conference rivalry.

“That was huge for us,” Hoadley said.

Next up for the Legion is a match on Sunday against Colorado as the MLR stages a weekend of play in Las Vegas. The Raptors opened their season with a 21-12 victory over Houston.