Landon Donovan had been retired less than a year. It was mid-2015, and the road that would meander through comebacks in MLS, Liga MX and the Major Arena Soccer League, as well as several TV and marketing gigs and then a 20-month effort to land an MLS expansion team for San Diego, took him north to Sacramento. There, the most decorated male player in U.S. soccer history had lunch with a businessman who’d spent most of his sports career in minor league baseball.
Warren Smith’s interest in meeting with Donovan doesn’t need to be explained. Donovan’s interest in Smith stemmed from the latter’s role in founding Sacramento Republic, a well-run, beautifully-branded, two-year-old USL champion that was obliterating attendance and revenue records, upending the notion of what lower-tier American pro soccer could be. Maybe Donovan could learn something. Maybe he might get involved.
Nothing substantive happened then, but seeds were planted. And four years later, as Republic prepares to move to MLS and Smith finishes up his own consulting work in Oklahoma—and gets ready to move to San Diego—an unlikely pair with plenty in common is teaming up.
Donovan and Smith came to soccer from very different places, but they speak about the game in similar ways. There’s already phraseology in common. They reference club culture, community and “process,” and the desire for the game to mean something well beyond the final score.
That's why Smith would walk the stadium aisles at Republic games, talking with fans—the team founder and president wearing a name tag on his polo shirt. It’s why Donovan would mingle with supporters and their families at restaurants and World Cup watch parties while trying to gather support for soccer in San Diego, his new home. And it’s why they’re now partnering to finally bring the pro game to a city that should’ve had it for a while, but somehow hasn’t managed to pull everything together.
This isn’t a bid, like Donovan’s SoccerCity MLS effort. This is a done deal. Smith and Donovan will launch a USL Championship team in San Diego in either 2020 or 2021. They have an expansion agreement in place with the league and a three-year lease (plus options) at the University of San Diego’s Torero Stadium, a 6,000-seat venue about five miles north of downtown. Smith is the majority owner for now, but is courting local investment. Donovan, who’s also an investor, is on board as executive vice president of soccer operations. Additional hires, like vice president of operations Ricardo Campos, a San Diegan and former technical director for the New York Red Bulls, also are in place.
San Diego’s MLS expansion bid failed at the ballot box. Smith, Donovan and their colleagues are doing this themselves.
“As we all came down from that and we were trying figure out what was next, that’s when Warren reached out,” Donovan told SI.com. “I was a little hesitant at that time because of what had just gone on [with the Soccer City referendum]. But when I sat and thought about it, what has been important for me since moving to San Diego was bringing San Diegans something they can be proud of, and soccer is my avenue.”
Donovan moved to San Diego initially for personal reasons, to be closer to his in-laws as he and his wife, Hannah, raised their growing family. But he soon fell for the city, which he said a couple years ago has a “community-friendly, small-town vibe" compared to L.A. That tapped into something in Donovan, who's always seemed to draw strength from a sense of connection or belonging.
“San Diego is my new home,” he said this week. “I don’t anticipate ever leaving, and I want to do something in this community around soccer that’s special. So why wouldn’t I want to do something with someone who clearly knows what they’re doing, who has a track record of success, of doing things with quality, and who’s as passionate as I am? Once I sat and thought about it and was able to let go of the disappointment of the previous two years, this was an absolute no-brainer.”
A formal announcement is expected later Wednesday (scheduled on June 19 for area code 619). The USL Championship, which sits atop the three-division USL pyramid and a level below MLS, has 36 clubs this season. 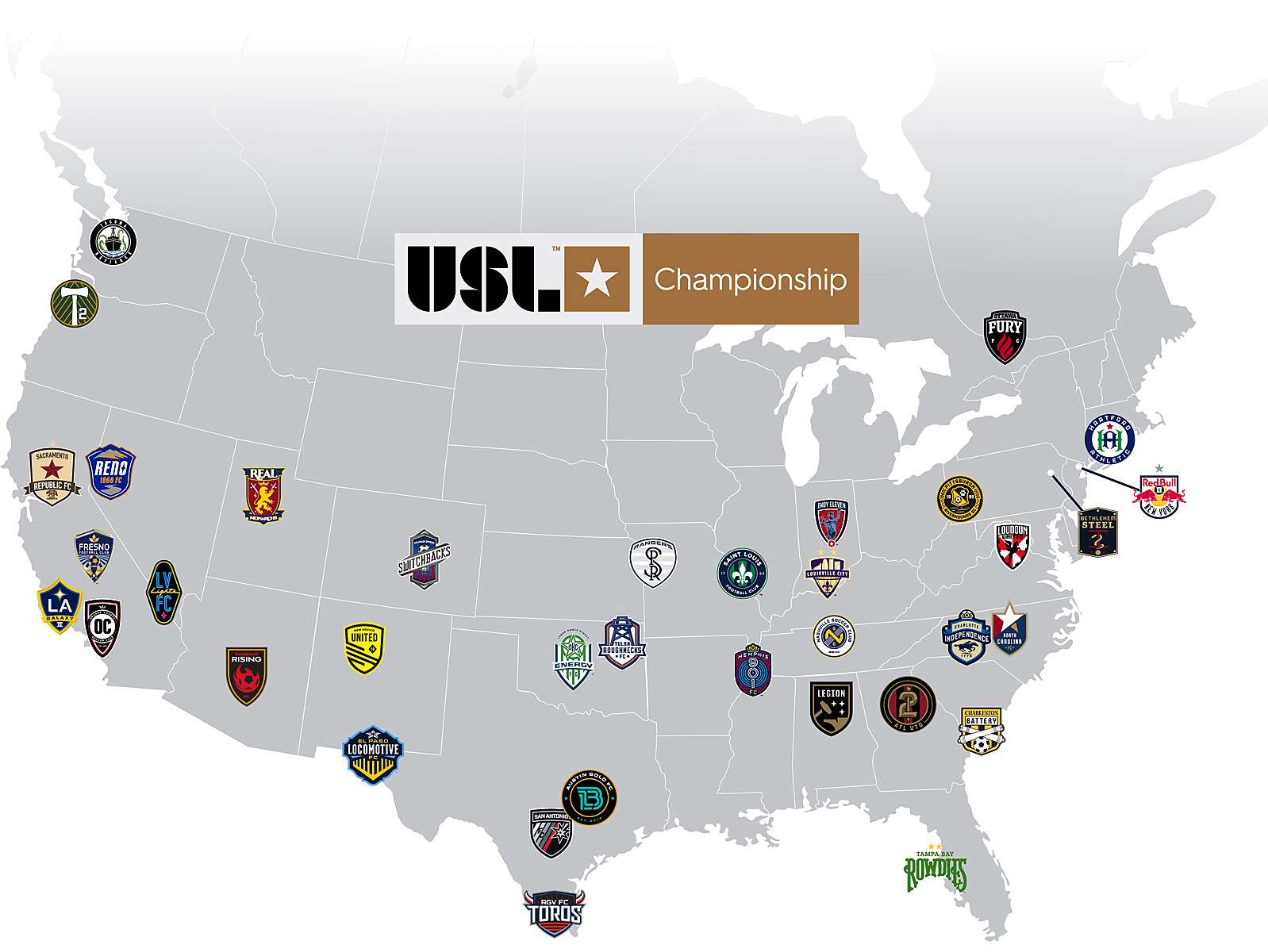 USL
Smith also believes in San Diego’s soccer potential, and he’s been familiar with the area for years. His family often vacationed there, and his son just graduated from San Diego State this spring. Considering his status, the gradual reduction of Smith’s profile at Republic and then his 2018 departure felt a bit awkward. But he’s a “start-up guy,” he said, not a billionaire who can carry a club into MLS. He worked as a consultant for a while, primarily with OKC Energy, before turning his attention toward San Diego.
“This is really a great opportunity to help the people of San Diego accomplish what I really think they want to accomplish,” Smith said.
Added USL CEO Alec Papadakis in a statement: “San Diego is a proud community with a rich soccer history, and we have no doubt that Warren Smith, a man of great experience and character, will lead this club successfully into the future."
There’s been no professional men’s outdoor soccer in the city since the San Diego Flash folded after the 2001 USL A-League season—that’s essentially a lifetime in the evolution of the American game. The WUSA’s San Diego Spirit shut down with the rest of the first women’s league two years later, and apart from the indoor Sockers, there’s been nothing but scattered semi-pro and amateur sides serving a city that, demographically, seems like an ideal location for a pro club. Locals paid attention to Club Tijuana, who play only 20 miles to the south, and watched soccer on TV in impressive numbers. San Diego is the country’s 29th-largest media market, yet it ranked fifth nationally in viewership (on Fox channels) during last year’s World Cup in Russia and currently ranks second in Women’s World Cup ratings.
The culture and the players are there, Donovan said—the youth system is fractured but robust—and they’re also across the border. Donovan speaks Spanish and said he has connections in Mexico and throughout Concacaf he’ll leverage to build his team.
“Landon's in charge of the product on the field, from everything to the player identification to the coaching staff, to ultimately player selection and contracting,” Smith said. “We see just an unbelievable opportunity to acquire talent and compete right off the back and couldn’t be more excited about Landon’s involvement there and ultimately leading the management.”
Smith added that he imagined the new team, which remains unnamed, to be “middle of the road” in the USL player salary hierarchy.
“We have to take baby steps first, and right now the immediate goals are to produce an exciting and winning first team that plays at Torero Stadium, and eventually when the timing makes sense we will think about building out an academy,” Donovan said, adding that a women’s squad might be part of the club’s future as well. “But in essence, we’ll have a version of an academy, in that we are going to utilize every youth soccer club in San Diego and try to find players from San Diego.” 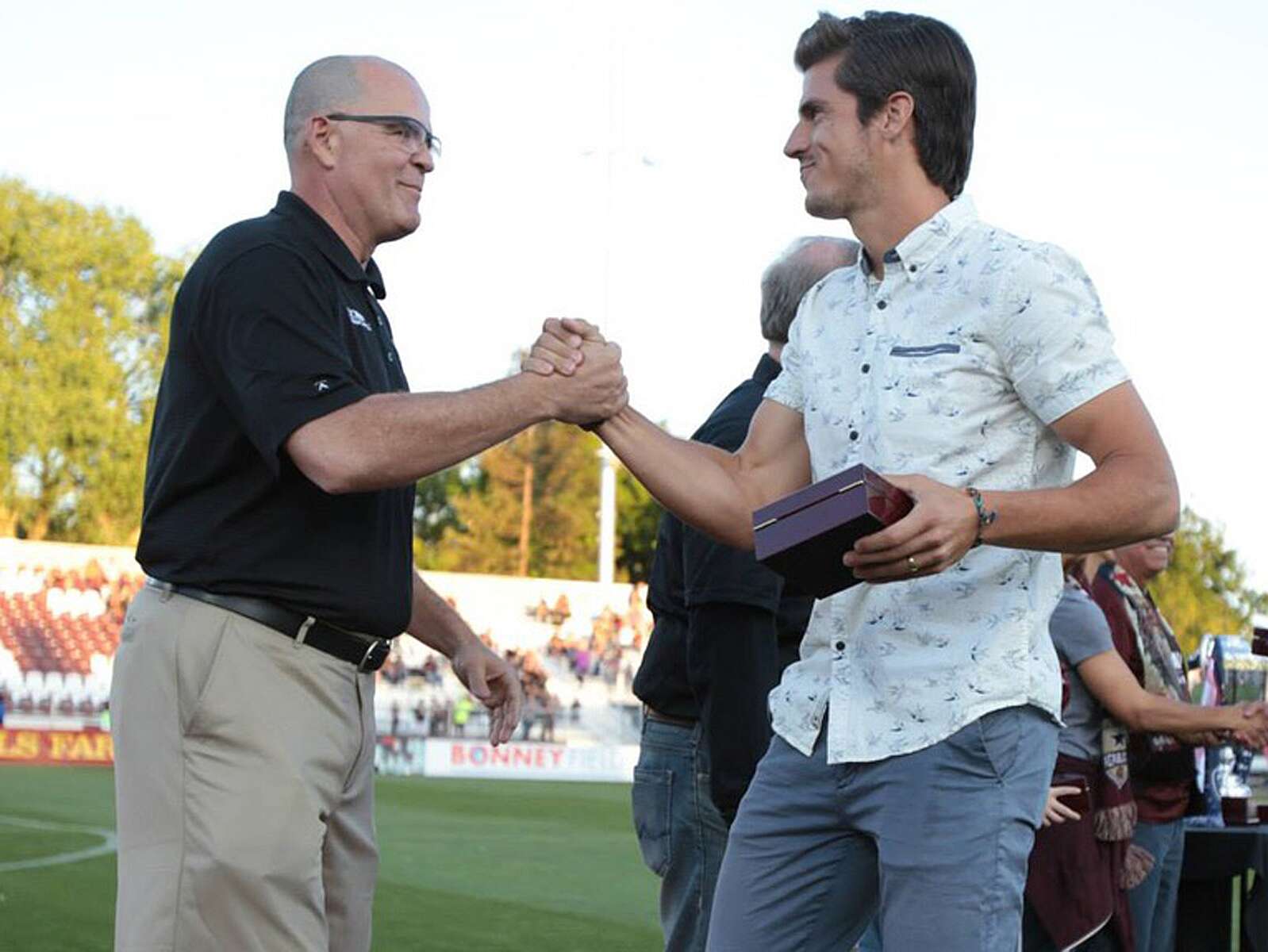 USL
Whether the team begins USL play in 2020 or 2021 will depend largely on how quickly this all comes together, Smith said. It'll be one or the other. While Donovan lays the technical foundation, Smith will dive into building the connections he forged so effectively in Sacramento—the kind that produce local investors and sponsors and season ticket holders, and especially a name and logo that means something to the community. He said he wants locals “to feel that ownership from the very beginning,” which means the branding likely won’t hinge on how much Footy McFooty Face merchandise Donovan still has in his garage. That civic-minded approach worked in Northern California. Republic remains successful on the field and at the gate, and its momentum was strong enough to weather investor upheaval and delayed MLS gratification. It almost certainly will be announced this summer as the next MLS expansion team.
San Diego’s soccer success, at least for a while, won’t be measured the same way. For a city that’s lived so long without the pro game, and which missed a good chance to bring it back last fall, starting with high standards but reasonable expectations is the way to go. A USL expansion fee that’s around 5% of MLS’s is a factor as well.
“Our main focus is just to build the best USL club that we can build and just compete and win at the level we’re at. Let’s see where we go from there. I don’t want to put the people in San Diego through what I put the people of Sacramento through,” Smith said.
Donovan said that after years of playing at an elite level, he wasn’t going to condone cutting corners. He knows what athletes and coaches need to be successful, and he promised San Diego’s USL team “will run like a professional organization should be run,” regardless of league or level.
“I’m more interested in the process and in doing things the right way then in what the ultimate outcome is,” Donovan said. “If this is the best USL club for the next 30 years and I’m a part of it, I’ll be ecstatic. If there’s a time where an opportunity to be a part of MLS comes, and our ownership and staff think that it’s something worth looking at, then of course we’ll look at it. But that’s not the goal. That’s not the objective. The objective is to do the best we can for San Diego in everything we’re doing.”

I for one and stoke for our USL team! Glad they are going to play at USD to start off with. Should be no problem filling 6K seats like the Legion. 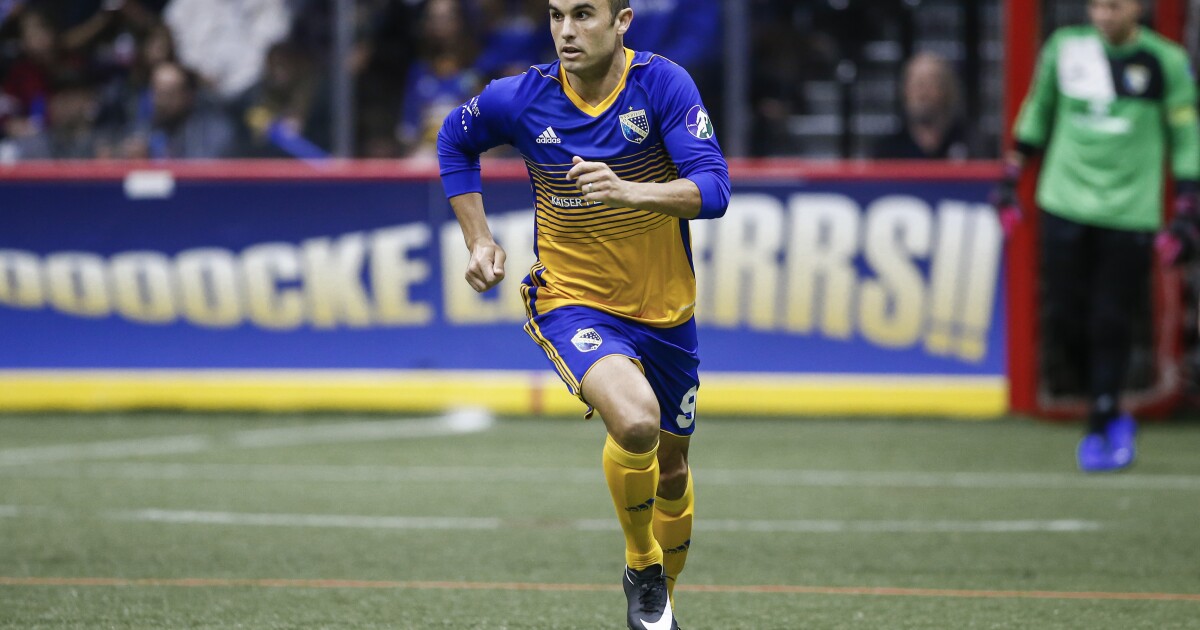 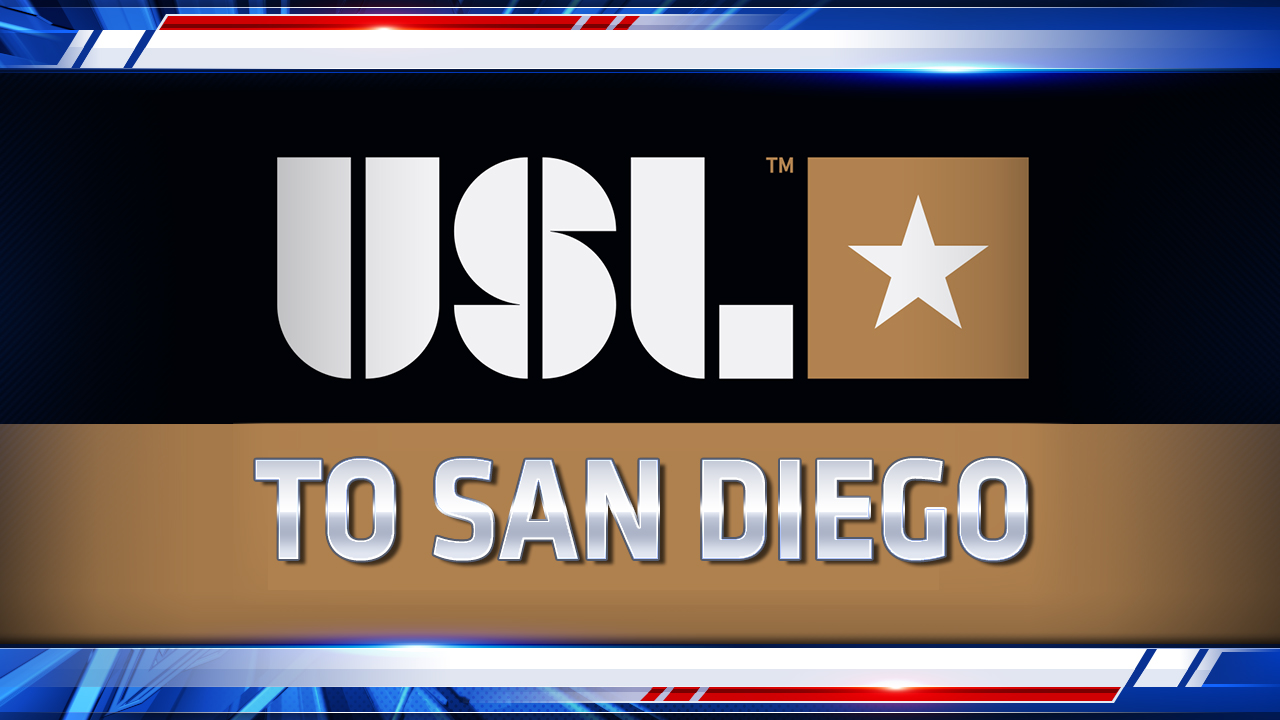 SAN DIEGO (KUSI) – The United Soccer League (USL) announced it has awarded a USL Championship franchise in San Diego to Sacramento Republic FC Co-Founder and former President, Warren Smith. The team has entered into an agreement with the University of San Diego (USD) to play at the University’s...