OAKLAND ---- It was so dominant, so one-sided, so out of the ordinary for these two heated rivals that it had to be seen to believe.

The Chargers and Raiders routinely play close games. But not this Sunday under a blue sky which featured but one black cloud, and it shadowed the Raiders like a persistent marine layer.

Until the second half.


Fortunately for the Chargers, their first half was of such quality that they prevailed for a 27-14 victory before 52,666 at McAfee Stadium.

Unlike in the Chargers three losses, the defense showed enough fortitude late to turn back a Raiders team which climbed from the mat and made life interesting for the Chargers.

"Credit to our defense,'' said LaDainian Tomlinson, who had his hand in all three of the Chargers' touchdowns. "Any time as an offense you struggle, you got to have your defense to play solid. And our defense definitely did that.''

Tomlinson definitely proved again he has few peers in the NFL.

Every time Tomlinson touched the ball, it seemed as if a milestone was reached.

His first-quarter touchdown reception to give the Chargers a 7-0 lead tied him with Lenny Moore, for scoring a touchdown in 18 consecutive games.

His 7-yard scoring run later in the quarter marked his 10th of the year, giving him at least 10 in his first five seasons. He and Seattle's Shawn Alexander are the only players to do so.

Then, late in the second quarter, his 4-yard touchdown pass to Justin Peelle gave the Chargers a 24-7 edge and caused Drew Brees to squirm.

"I'm shaking, I'm getting a little scared,'' Brees said, with a grin. "He has the best quarterback rating in the history of the game right now. I don't know if we should let him throw anymore.''

Added Tomlinson: "It was a little tougher than it looked.''

But the Raiders disengaged their snooze alarm at halftime. Plus, the Chargers' scoring machine slowed after converting on four of their final five first-half drives, so finally a ballgame broke out.

"The first half definitely did not go the way we anticipated,'' Raiders cornerback Charles Woodson said. "We came out in the second half and gave a good effort.''

Although the Raiders' push fell short, that doesn't mean there weren't some anxious moments along the Chargers' sidelines.

Nate Kaeding did kick a 33-yard field goal for a 27-7 cushion, but the Raiders countered with LaMont Jordan's 1-yard scoring run, slicing the deficit to 27-14.

The Chargers were nervous, and not just because of the Raiders' renewed effort. They started the afternoon missing four regulars ---- including returner Darren Sproles ---- and lost two more front-line players during the game.

The Raiders advanced to the Chargers' 9-yard line with five minutes remaining, but a Kerry Collins fourth-down pass to Jerry Porter was disrupted by DeQuincy Scott.

Then, when Tomlinson lost a fumble on his 9 on the following series, those wearing Chargers shirts swallowed hard.

The call was eventually overturned, but Brees threw a shaky pass to Keenan McCardell and punter Mike Scifres dropped the snap in the end zone. Scifres gathered it time to get the punt off, but not before a few sweat beads found Schottenheimer's forehead.

"We were tying to go down and get points and pad that lead, but they did a good job getting back into the game,'' said Brees, who was 14-of-20 for 164 yards and a touchdown. "But our defense did a heck of a job holding them.''

The Raiders failed to penetrate the Chargers' 35 on the final two chances, so the Chargers departed the East Bay with their fourth straight victory over the Silver and Black and second straight in Oakland.

"Marty has been talking about us finishing games. ... He has been stressing about making plays when you have to,'' linebacker Donnie Edwards said.

The Chargers finally did. And they did it to the team they love to beat the most.

like rushing the ball wasnt enough!!! finally utelizin him correctly!
B

Throw, Catch, and Pass for a TD.

Throw a TD pass in the NFL? 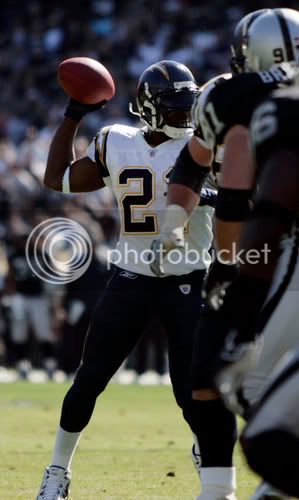 Run for a TD in the NFL? 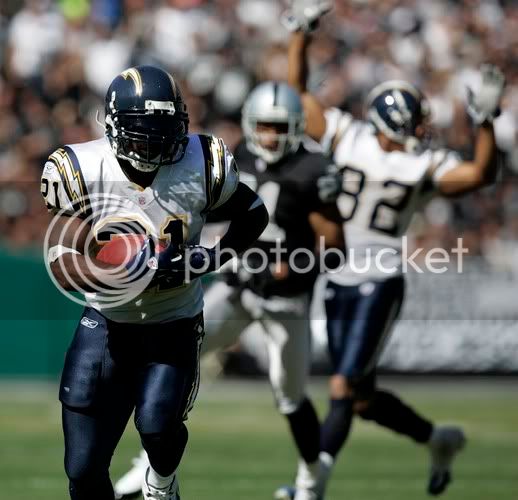 Catch a TD pass in the NFL? 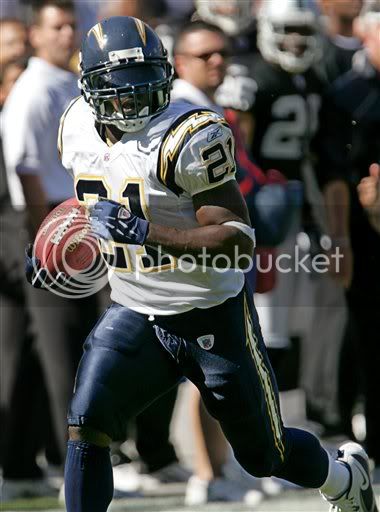 Well imagine all 3, LT, LaDainian Tmolinson of the Chargers, is the first NFL player to do this since 1979. He is truely awesome.