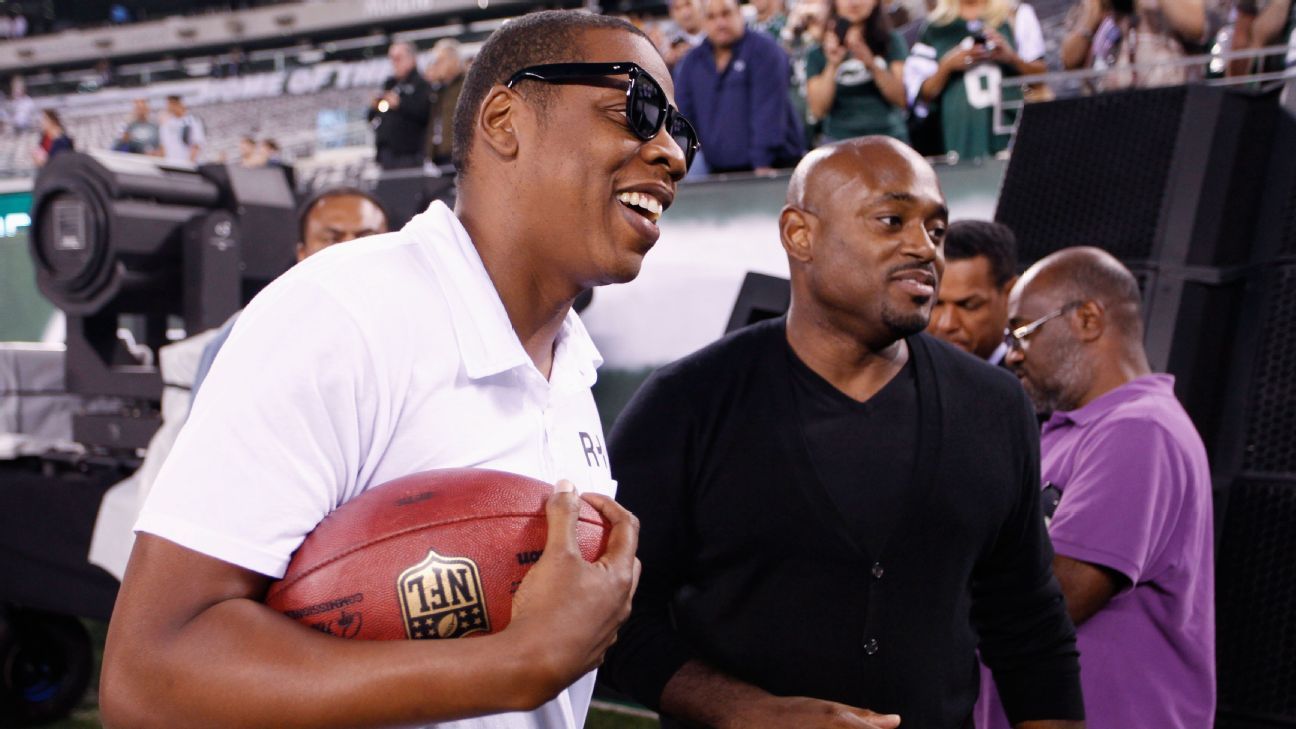 Jay-Z said he still supports former quarterback Colin Kaepernick, but now is focused on action. "Everybody knows I agree with what you're saying [in Kaepernick's underlying message]. So what are we gonna do?"

NEW YORK -- Unsigned NFL quarterback Colin Kaepernick might as well have been seated next to NFL commissioner Roger Goodell during Wednesday's news conference to officially announce the league's new partnership with Shawn "Jay-Z" Carter's entertainment company.
The former San Francisco 49ers quarterback's presence was definitely in the room.
Although Goodell and Carter both faced a volley of questions about Kaepernick, who became a polarizing figure nationally after protesting police brutality and systemic oppression before games, Carter was repeatedly asked to explain his reasoning for partnering with the NFL while Kaepernick, whom he has strongly supported, has not been on a roster since the end of the 2016 season.
Several of the questioners echoed the sentiments of many on social media, who have expressed disappointment and anger that Carter would agree to have his company, Roc Nation, lead the NFL's endeavors in music and entertainment.
Through music and entertainment, Carter said, he can help amplify the league's Inspire Change initiative for social justice. And the opportunity to potentially accomplish big things and uplift many in communities important to him was an opportunity he couldn't ignore.
"We forget that Colin's whole thing was to bring attention to social injustice. In that case, this is a success. This is the next phase," the entertainment magnate said. "There [are] two parts of protesting. You go outside and you protest, and then the company or the individual says, 'I hear you. What do we do next?'
"For me it's like action, [an] actionable item, what are we gonna do with it? Everyone heard, we hear what you're saying, and everybody knows I agree with what you're saying [in Kaepernick's underlying message]. So what are we gonna do? You know what I'm saying? [Help] millions and millions of people, or we get stuck on Colin not having a job."
Carter appeared unfazed while answering only slightly different versions of the same question about Kaepernick throughout the invitation-only gathering at Roc Nation's offices. In a sign of how important the partnership with Roc Nation is to the NFL, the commissioner of professional sports' most powerful league went to Carter's turf for the roll-out. And Goodell knew exactly what to expect, he said.
"I don't think either one of us expected that this relationship wouldn't have its critics," Goodell said. "But you don't let the critics or the negativity overwhelm the chance to do something really positive. We talked about this [Kaepernick's situation].
"We talked about a variety of issues. When we first met, we talked about entertainment and how we do that. But the No. 1 thing we went to was impact, that we can have an impact together, and that we can do some really positive things in our communities."
Kaepernick did not comment on the deal, but he posted a tweet later Wednesday to commemorate the third anniversary of "the first time I protested systemic oppression."
"Today marks the three year anniversary of the first time I protested systemic oppression," he wrote in the tweet. "I continue to work and stand with the people in our fight for liberation, despite those who are trying to erase the movement! The movement has always lived with the people!"
Carter understands that many people believe he should have shut the door on the NFL, "but people have to evolve," he said. "People have to want to be better and people have to want to have conversations. This isn't Twitter.
"You can't just throw someone out if they make a mistake. This is the real world. You can't say, 'Oh, you made a mistake, you're canceled. I'm never speaking to you again.' That's doesn't accomplish anything. That's what I believe. I believe real change is had through real conversation and real work."
New England Patriots owner Robert Kraft, who sits on the board of REFORM Alliance, a nonprofit criminal justice advocacy group that Carter co-founded, introduced Carter to Goodell, believing they would work well together. After Kraft participated in their first meeting, Goodell and Carter envisioned a path forward together.
"We're both committed to sort of saying, 'Let's get to work,'" Goodell said. "Let's go show people that this is going to be a great thing."
F