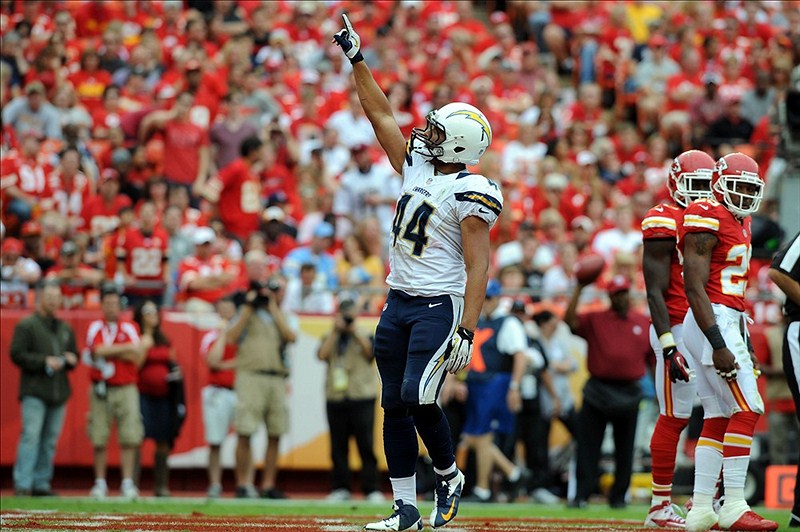 San Diego Chargers running back Jackie Battle (44) celebrates after scoring a touchdown against the Kansas City Chiefs in the first half at Arrowhead Stadium. : John Rieger-US PRESSWIRE

San Diego is off to a 3-1 to start the season, just as they were a year ago this time.

Of course things do seem different. The personnel is different at many positions but so is the team's attitude having responded to a very poor performance in Atlanta with a great performance in KC.

Denver having added Peyton Manning, was predicted by many to win the division. They blew out the Raiders on Sunday 30-6, are are now 2-2. Oakland and Kansas City sit at 1-3 and are out of the division race early.

Denver visits New England next Sunday before a Monday Night trip to San Diego in two weeks. At worst the Chargers and Broncos will be tied for the division lead going into Monday Night football, at best the Chargers will have a 4-1 record with a 2-game lead in the AFC West.

San Diego created six turnovers, three fumbles and three interceptions which created 24 points off. Two early turnovers helped the Bolts get off to a 20-0 lead in the 2nd quarter.

Rivers was on it

Philip Rivers had one of his better days, and when he's on it, he's as good as they come in the National Football League.

Statistically Rivers did not make many total passing attempts with a lead on the scoreboard, but he finished 18 of 23 for 209 yards with two touchdowns and an interception. He was sacked three times but in general he had enough time to find a flurry of receivers.

Running back by Committee

Ryan Mathews carried the ball 14 times for 61 yards with a long run of 14 yards. Jackie Battle though, scored twice on 15 carries for 39 yards.

Battle, not Mathews, was the starter and feature back also catching four passes for 42 yards.

"I thought it was important to let Jackie start the game," said Norv Turner via CBS Sports.

"I wanted to make sure we got in a rhythm, and we had planned specific things for Ryan, and I just thought he responded in the four minutes right there at the end. He was rolling and hitting it. You ask the confidence I have, and there at the end we're trying to keep the ball from them, trying to put the game away, and he's the guy handling the ball."

Prior to joining the Chargers before this season, Battle spent five years in Kansas.

"I mean, I think I only had three or four in my whole career in Kansas City over five years," said Battle via the Chargers official website.

"To get two here was a good feeling. It felt good to run out there against my old teammates, especially guys I practiced against for five years straight. This was the first time I went live against them, so that was a bit strange. But once the game got going that kind of wore off."

Nick Novak, signed this week for the injured Nate Kaeding, may make it hard to let him go once Kaeding returns from a groin injury.

Turner said Monday that Kaeding will be out "for a while".

Donald Butler is having a fine season and making plays when it counts.

The inside linebacker gave the Chargers a 27-6 lead in the second quarter off of an interception of KC quarterback Matt Cassel which he returned for six.

"The ball got tipped and it was right in front of me,” said Butler via the Chargers official website.

"Hats off to the guys up front to get pressure on the quarterback. He threw it and I was in a good place to make a play. I’m telling myself to run ahead as fast as I can and score and get seven for the team. You see the end zone, and Melvin Ingram made a great block for me, and I was able to get in there."

Butler has 20 total tackles on the season to go along with the interception an a sack. He trails only Atari Bigby (26) for the team lead in total tackles.

In Week 5 San Diego finds themselves on the road again, this time in New Orleans for a Sunday Night matchup against a winless Saints team. New Orleans defense doesn't have a whole lot of bite but Drew Brees and his guys can still put up numbers, scoring 27 in a one-point loss to Green Bay Sunday.

They're beating teams they're supposed to beat. When the D plays like that against a weaker team that makes me a little hopeful, even though I'm still sour from the Falcons loss.

But I still wanna see a significant win. So far that won't happen till we play the ponies....