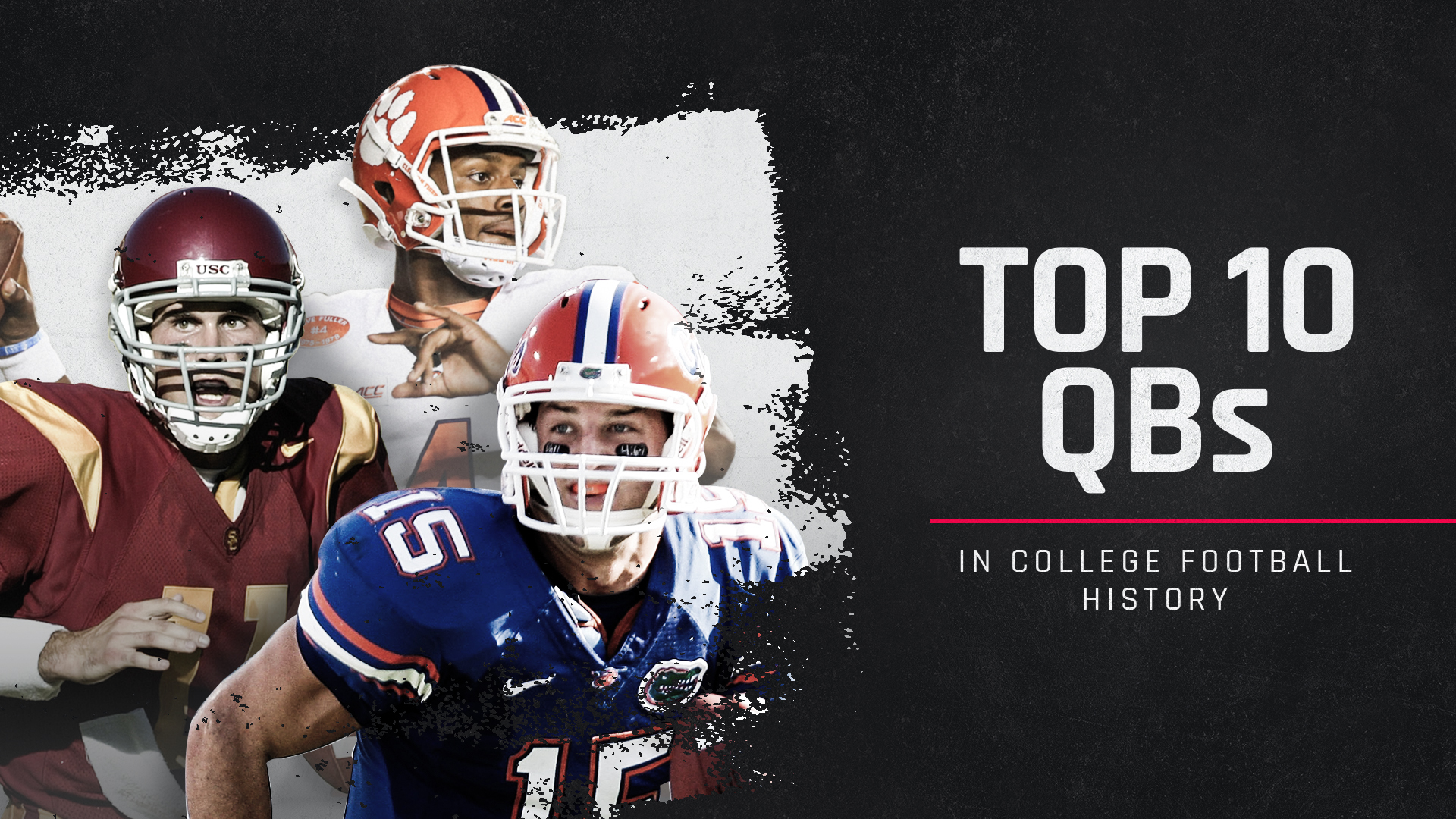 The quarterback is the big man on campus, and that has nearly always been the case through 150 college football seasons.

We say “nearly” because the quarterback position wasn’t introduced until 1880 — 11 years after the first college football game was played. But it has become so integral to the sport and the American lexicon that it’s now as synonymous with the sport as the ball with which it is played.


For better or worse, the quarterback is the most visible person on their team, second only to the coach. Because of this, they assume the role of leader and — more often than not — as they go, so does the team. It is, without hyperbole, the most important position in college football.

It's not an easy science, but this is the list we came up with, third in a series of lists celebrating college football's 150-year history:

10. Sammy Baugh, TCU
To put his talent in perspective, consider that Baugh still ranks tied for fifth all-time in TCU history with 40 touchdown passes, which he accomplished from 1934-36. He led the Horned Frogs to a national championship in 1935 and completed more than 50 percent of his passes in 1936 — which was a big deal at the time. Baugh was a pioneer of the forward pass, and he made it a proficient practice for other college football quarterbacks to follow. "Slingin' Sammy," the oldest quarterback on this list, still endures today.

9. John Elway, Stanford
Elway was a generation talent, and we gave him the edge over fellow Stanford quarterbacks Andrew Luck and Jim Plunkett. Elway totaled 77 touchdowns and 39 interceptions from 1979-82. He also threw six touchdowns against Washington State and Oregon State in 1980, Stanford single-game school records that still stand. He also had a pair of 400-yard games against Purdue and Ohio State. He will always be known most for the rocket arm that led to him being selected No. 1 in the NFL Draft in 1983, but that all started with his time in Palo Alto.

8. Doug Flutie, Boston College
The 5-10 quarterback grew into a college football legend at Boston College with his play-making ability. He had 10,759 passing yards with 70 touchdowns to 56 interceptions, adding 969 rushing yards and seven touchdowns. It's impossible not to daydream about how good Flutie would have been in today's spread offenses. He starred with the Eagles from 1981-84, and in a memorable senior season led BC to 10 wins, beat Miami with a legendary Hail Mary and won the Heisman Trophy.

7. Roger Staubach, Navy
Staubach could be considered one of the original dual-threat quarterbacks. He totaled 18 passing touchdowns and 18 rushing touchdowns with the Midshipmen, and this is where the legend of "Captain America" began. He led Navy to a nine-win season in 1963, which included victories at Notre Dame and Michigan, a home win vs. No. 3 Pitt and the all-important match against Army. The Midshipmen finished No. 2 in the final AP Poll, and Staubach went on to win the Heisman Trophy. He served in Vietnam after graduation before beginning his professional career with the Dallas Cowboys.

6. Deshaun Watson, Clemson
Watson took Clemson from national contender to national champion with an incredible three-year run in which he compiled a 32-3 record as a starter. He finished with 10,168 passing yards and 90 touchdowns, compiling 1,934 rushing yards and 26 touchdowns. Watson saved his most memorable performances for the biggest stages in back-to-back College Football Playoff championships against Alabama (even in the loss in the 2016 championship game, Watson was the story). He capped his college career with a last-second touchdown pass to Hunter Renfrow that gave the Tigers their first national championship since 1980. He kickstarted Dabo Swinney’s dynasty and paved the way for Trevor Lawrence, who could be on this list in two years.

Young called his shot after the 2005 Rose Bowl victory against Michigan, and he backed it up by putting together one of the best single seasons in college football history in leading the Longhorns to the 2005 national championship. Young took his lumps early in his career, but he led a Texas offense that averaged 50.2 points per game into a showdown with the USC dynasty in the Rose Bowl. Young had 467 total yards and scored the game-winning touchdown in a 41-38 victory that is widely considered the greatest single-game bowl performance of all time. It capped a remarkable career with Texas — and the school is still trying to get back to that point today.

4. Tommie Frazier, Nebraska
Even today, we can still see Frazier plowing through a pile of Florida defenders and breaking loose for a touchdown. That 62-24 victory against the Gators in the 1996 Fiesta Bowl is part of a legacy that saw Frazier lead the Huskers to de facto national championship game appearances in 1993, ‘94 and ‘95. He was the spearhead of Nebraska’s potent option attack, passing for 3,521 yards and rushing for 1,955 more while totaling 79 touchdowns for his career. He never won the Heisman, coming only as close as runner-up to Eddie George in 1995, but was clutch in national title victories against Miami and Florida. They simply had no answer for Frazier, the best player on one of the greatest dynasties in modern sports.

3. Matt Leinart, USC
Leinart was the rock star quarterback of the Pete Carroll dynasty — the one who famously said after the "Bush Push" game that, "We don't know how to lose. It's not in our nature." He was 37-2 as a starter with the Trojans and led two national championship runs, finishing with 10,693 passing yards and 99 touchdowns. He managed the hype throughout his superstar career despite his golden-boy status on those dominant USC teams, winning the Heisman Trophy in 2004 and finishing third in 2005 to teammate Reggie Bush. Leinart lost the epic duel with Young in the Rose Bowl, and that is the only reason he's not higher on this list.

2. Peyton Manning, Tennessee
Manning never won a national championship or a Heisman Trophy, but his college career foreshadowed what was coming at the next level. Manning changed the game with a mental approach that was ahead of its time. He had the physical skills to match, making NFL-caliber throws even as a star-studded freshman. He also managed to live up to the incredible bar set by his father Archie Manning. He was 39-6 as a starter and finished with 11,201 yards and 89 touchdowns. The Florida losses sting, but Manning was 8-4 against ranked teams in his final three seasons, finishing runner-up for the Heisman Trophy in 1997.

1. Tim Tebow, Florida
Tebow played a part-time role on the 2006 national championship team before a three-year run of dominance in which he finished 35-6 as a starter and lost just two games over his junior and senior seasons. He had the stats, compiling 12,232 yards of offense and 145 total touchdowns over his four-year career. He had the accolades, winning the Manning and Davey O’Brien awards and twice winning the Maxwell. He also won AP and Sporting News player of the year honors in 2007, the same season he became the first sophomore ever to win the Heisman Trophy. He had the titles, leading the 2008 national championship Gators. He had the intangibles, exhibited best in “The Speech,” which will live on with Florida fans forever. He was the best player in the SEC at the height of its dominance in the BCS era, and he remains one of the best ambassadors for the sport today. Tebow is an easy choice at No. 1.
F

Tim Tebow was the greatest college QB of all time but isn't good enough to be in the NFL? That makes no sense. He was never the greatest of his time, nevermind of all time. He just was on the best team. The argument for him is the same one that got Torretta the Heismann over Faulk.
Reactions: Fender57

Tebow was and is garbage as a QB. Period. This list is a joke.
F

I agree with them that Ryan Agnew should not be on the list.
Q

Stats and wins don't seem to be valid arguments for judging a QB's greatness.
F

The best college QB I ever saw was Michael Vick.

And so soon forgotten...

A 6'2" quarterback, Klingler rewrote numerous college passing records for the Houston Cougars from 1988-1991. On November 17, 1990, Klingler threw 11 touchdown passes against Eastern Washington University at the Astrodome, and on December 2 set the NCAA (division I) record for most yards gained in a single game, 716 (since surpassed by Connor Halliday in 2014). In his four seasons at Houston, he completed 726 of 1,262 passes for 9,430 yards and 91 touchdowns, all of which were school records at the time. Klingler set the NCAA record for touchdown passes in a season with 54 in 1990. His single season touchdown pass record stood for 16 years until it was broken in the 2006 Hawaii Bowl by University of Hawaii quarterback Colt Brennan with 58, though Brennan needed three more games than Klingler to break the record. Klingler made a valiant push to win the Heisman Trophy but was eventually beaten by Ty Detmer of Brigham Young University and Raghib Ismail (runner-up) of Notre Dame. Klingler remained a stand-out for the University of Houston and still ranks in the top ten for career touchdown passes and yards in a career.