Blame will fall on Rivers for Monday Night collapse 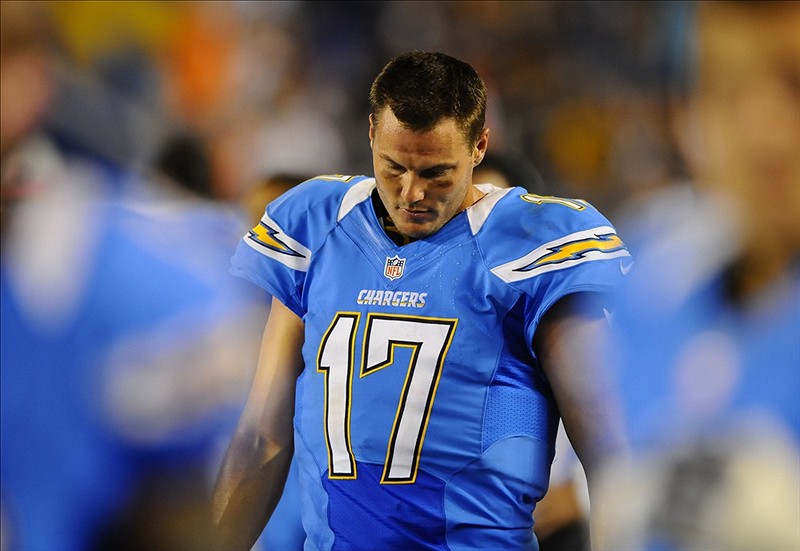 San Diego Chargers quarterback Philip Rivers (17) hangs his head on the sidelines after throwing an interception that was returned for a touchdown during the fourth quarter against the Denver Broncos at Qualcomm Stadium. The Broncos won 35-24. Christopher Hanewinckel-US PRESSWIRE

Philip Rivers' optimism got the better of him. Rivers was optimistic his receivers were open in the second half when they were not.

After the game he remained optimistic it's not a sign of things to come.

"It’s not the way we want to go into the bye week," said Rivers.

Blame will be placed on Rivers, who completed 5 of 6 passes in the third quarter but then missed the mark on 9 of 18 passes in the fourth quarter including three interceptions in Monday's 35-24 loss.

Blame will be placed on Rivers for not tucking the ball in on a third quarter sack which Denver returned 65-yards to make it a 10-point lead.

Six turnovers, a 24-0 lead blown, 35 unanswered points, all on Rivers. This is how it has been written.

However blame could also be placed on the Chargers secondary which allowed Peyton Manning to go vintage; completing 15 of 16 second half passes for 167 yards and three touchdowns. Fingers could also be pointed towards an offensive line which needs some work and allowed four sacks; a number which could have been higher if not for Rivers ability to get rid of the ball quickly.

"If anyone wants to blame one person they don't really know football," Eric Weddle said inside the Chargers locker room after the game.

Rivers himself did not chalk up the four interceptions to unbridled optimism in his right arm, but rather he admitted they were poor throws.

"I wasn’t fooled out there once today," said Rivers.

"The first interception, I didn’t see exactly how it ended. I knew I gave Gates a chance down there and they ended up with it. The other ones were bad throws. There’s really no other reason for them."

But Rivers' reputation as an inconsistent star quarterback who is careless with the ball will continue in the popular media:

-What has happened to Philip Rivers? via CBS Sports.com

-Note to Philip Rivers: It wasn't just another loss, via the Los Angeles Times.

-If Ever A Moment Called For Facepalm, It’s Philip Rivers Last Night, via Deadspin.com

Eric Weddle concluded that the Chargers are "not going to point fingers."

"The outside can say anything they want," he said.

"We've been in this position; we've been much worse. We'll get back. We'll rebound. "