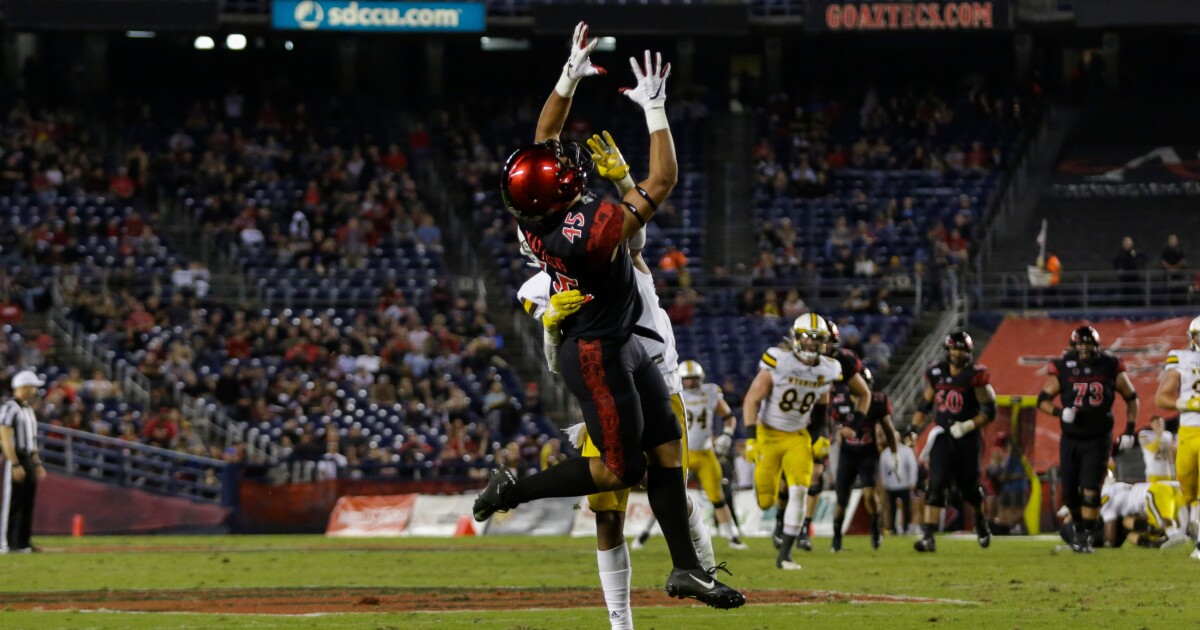 Sending in the punt team or field goal unit on fourth down isn’t automatic in those situations where many — most? — would kick it.

“Anytime we cross the 50 we’re ready to go for it on fourth down,” SDSU offensive coordinator Jeff Horton said. “Coach is kind of a riverboat gambler that way.”

Two such occasions came in the third quarter against Wyoming. Both plays worked. Both drives ended with the Aztecs in the end zone, turning around their fortunes after a slow start against the Cowboys.

The first call didn’t seem like too much of a stretch. It was fourth-and-1 from the Wyoming 17-yard line with SDSU trailing 14-6.

Quarterback Ryan Agnew handed the ball to running back Juwan Washington, who picked up 2 yards. A whole yard more than he needed.

On the next play, Agnew hit Washington with a 15-yard touchdown pass to make it 14-13.

The next drive was more dramatic, SDSU facing fourth-and-3 when its drive stalled at the Wyoming 35-yard line.

The distance was doable, but what the Aztecs did wasn’t what one would have expected.

Horton called a play in which wide receiver Isaiah Richardson was the primary option slanting across the middle.

That wasn’t where Agnew chose to go, however. Instead, he put a ball up 25 yards down field that wide receiver Jesse Matthews used those “great hops” that the quarterback tells everyone about. Matthews hauled in a pass that was just out of the reach of Wyoming cornerback Jordan Murry.

That delivered a first-and-goal from the 10-yard line that Washington turned into a 10-yard touchdown run on the next play for a 19-14 Aztecs lead.

What was going through Horton’s mind as the ball was in the air before a hotly contested catch?

“See how I look?” Horton asked. “No wonder I look like (bleep), right? I’m getting too old for that.”

Those two conversions put SDSU over 50 percent for the season (7-for-13) when going for it on fourth down.

“I don’t know if that was the smart thing to do or not,” Long said when questioned after the game about his fourth-down leanings. “We’re not here to play analytics. We’re here to win football games, and I thought we needed to make a fourth-down play to win the game, and it ended up OK, this time.

“If it doesn’t end up alright and you think I shouldn’t do that kind of stuff (in the future), you can write bad things about me.”

2. Remain calm, all is well
SDSU’s winning drive in the fourth quarter began with Agnew scrambling as he does, trying to make something, anything, happen.

Running left toward the line of scrimmage he suddenly tried a jump pass to fullback Isaac Lessard that went for an 18-yard gain.

When asked about it, Horton said: “Didn’t you like our trick play?”

Added Horton: “To me the sign of a really good quarterback, great quarterback, is a guy who can make off-schedule plays. It doesn’t go as planned, yet he’s still able to create something and make it happen, in that case with his legs and his arm.

“You see him do it before. It’s something you try to corral at times, but yet that’s one of his strengths.”

Agnew is compelling that way. You never know what he’s going to do next. Some fans have been frustrated with his performance, especially at times when he seems too quick to abandon the pocket (a habit noted more last year than this year).

But he makes plays.

After the jump pass, the best was still to come.

Agnew was 5-for-5 passing on that winning drive. The longest play was a 28-yard completion to tight end Daniel Bellinger that was delivered on the fingertips and moved SDSU to the Wyoming 26.

Five plays later, the Aztecs had a second-and-8 at the Wyoming 12 when Agnew found himself scrambling once again. The quarterback was quickly running out of room running to his left when he suddenly spotted Bellinger again, this time open in the middle of the end zone.

Somehow, Agnew managed to set himself, throw back against his body and hit Bellinger right in the numbers, a split second before two Wyoming defenders could get to the quarterback.

“That’s one of the cardinal rules, you never throw it late, in the middle and across your body,” Horton said.

As the ball headed toward its target, Horton thought a Wyoming defender might have an angle on it for an interception and self-diagnosed the “first stage of heart attack.”

But the ball found its target and the Aztecs had pulled out a victory. It was the seventh touchdown pass thrown by Agnew since his last interception, a stretch of 82 attempts without a pick. It was the 22nd second-half comeback during the Rocky Long era, the most in SDSU’s Division I history (Claude Gilbert is second with 13).

3. About those slow starts
A good play or movie begins with a compelling opening scene that grabs the audience from the get-go.

SDSU should keep this in mind the remainder of the season.

The first quarter (heck, the first half) has not been the Aztecs’ finest hour (and a half). SDSU has scored just 26 points in the opening period — and 10 of those points came in the Week 2 win at UCLA.

Each of the past three games has featured a Matt Araiza field goal in the first quarter. And that’s it.

The second quarter has been even worse, with 23 total points in six games. By comparison, the third and fourth quarters have featured 37 and 41 points, respectively.

The natives at SDCCU Stadium seemed particularly restless as the Aztecs went into the locker room for halftime intermission trailing the Cowboys 14-6.

It wasn’t necessarily boos that were audible from the stands, more like whatever sound grumbling fans make (because they don’t actually say, “grumble, grumble, grumble”).

The Aztecs returned for the second half, scored touchdowns on their first two drives of the third quarter and all the sudden the place perked up.

“We knew last night it was going to be like that the whole game,” said Horton, acknowledging that yards and points were going to come at a premium. “They were almost as highly ranked as our guys (on defense) going in. We’ve seen other teams have a hard time running the ball on them, yet we had to try to really be patient and stay with some things.

“In the first half when it wasn’t clean you saw some things where maybe, hey, if you stay with it maybe some creases will start happening, and they did.”

Winning, especially with a rousing second-half comeback, takes the edge off a slow start.

Then again, no one would complain about seeing a touchdown on the game’s opening drive.
Reactions: Quetzalcoatl

Nice to see the ranking, but seriously, could SDSU beat Texas or Texas A&M?
Q

Kwak said:
Nice to see the ranking, but seriously, could SDSU beat Texas or Texas A&M?
Click to expand...

Let's stop playing so we can make it into the Top 20.
Reactions: Gill Man

Let the other big name programs knock each other out. Then all the Aztecs have to do is take care of business and win against everyone else this season. End result should be a bowl berth on New Year's Day.

Anyone up for a tailgate at the SDCCU stadium lot this Saturday?

This is a football thread but it’s appropriate anywhere to announce SDSU defeated BYU in men’s basketball 76-71.
Reactions: Quetzalcoatl and wrbanwal

Can we rename the thread “how about those Aztecs “?

Fender57 said:
This is a football thread but it’s appropriate anywhere to announce SDSU defeated BYU in men’s basketball 76-71.
Click to expand...

disappointed with the offense.
Q

A win would have given us a trifecta

Bummer. Damn. We were hovering near the rankings, so much for that. Seems like a pattern.

Gill Man said:
Bummer. Damn. We were hovering near the rankings, so much for that. Seems like a pattern.
Click to expand...

In the end, does it really matter? Win or lose they're going to a completely irrelevant bowl game.
Reactions: Fender57
Q

TTK said:
In the end, does it really matter? Win or lose they're going to a completely irrelevant bowl game.
Click to expand...

Yes. It matters. I would like to finish Top 25 some day.

Every time they sniff the top 25 they choke to a sucky school like Nevada.
Last edited: Nov 10, 2019
Reactions: TTK and Gill Man

Fender57 said:
Every time they sniff the top 25 they choke to a sucky school like Nevada.
Click to expand...

Fender57 said:
Every time they sniff the top 25 they choke to a sucky school like Nevada.
Click to expand...

it's like an annual ritual with that school...WTF. Is that on the head coach or what???? I like Rocky Long and all but if this keeps happening year after year something probably should give. But I'm not sure who the hell would come here to coach that's any better.

Gill Man said:
it's like an annual ritual with that school...WTF. Is that on the head coach or what???? I like Rocky Long and all but if this keeps happening year after year something probably should give. But I'm not sure who the hell would come here to coach that's any better.
Click to expand...

If SDSU moved to Carson we’d all have fun being haters. It’s something like that.
Reactions: TTK and Gill Man

When is SDSU going to get a QB? He missed so many throws yesterday.
The last 2 series were particularly pathetic.

When is SDSU going to get a QB? He missed so many throws yesterday.
The last 2 series were particularly pathetic.
Click to expand...