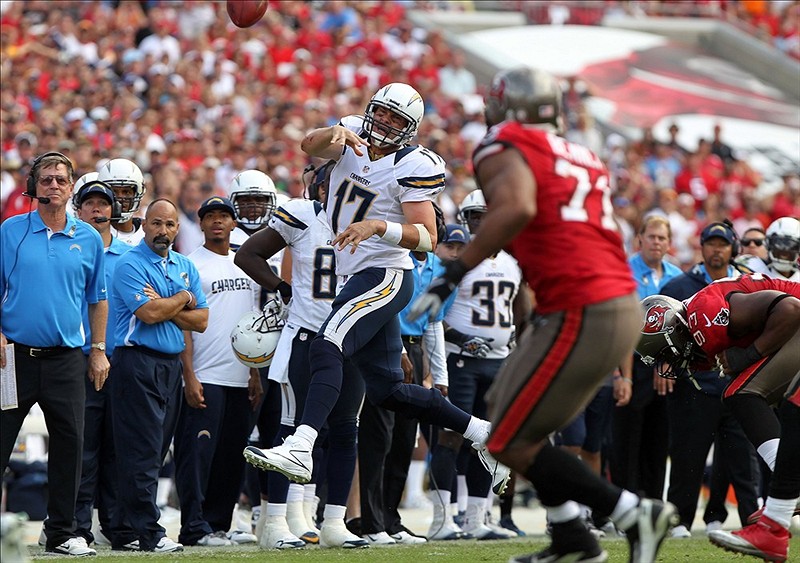 It would be easy to write here that Norv Turner's days in San Diego are numbered. That has been speculated on for most of the season and at several points since his tenure began in San Diego. But even after dropping four of their last five games, Turner may keep his job.

Since the Chargers 2012 meltdown began, Turner's basic argument has been, and continued to be after Sunday's 34-24 loss in Tampa, is that the team is trying hard, is tough and is giving 100-percent effort. In other words, with the talent assembled, he and the players are trying their best.

"It's not acceptable to play hard and not win, and that's what happened," Turner said, via the Associated Press, raising his voice after the game in reply to a reporter's question.

Turner's previous argument was that the offensive pieces recently acquired still needed time to gel together. That's a hard argument to make, now that Philip Rivers has thrown 12 interceptions in nine games.

For Rivers, his first interception simply was a mental mistake, throwing it directly to a Bucs defender.

He admitted after the game, via the AP, "In hindsight, not only do I wish I was throwing it over his head, I probably shouldn't have thrown the ball, period. Field goal ties it up. Quick decisions, and I made the wrong one there."

His second, less meaningful interception, as the Chargers were down 10, was an underthrown ball. That throw gives more evidence for those who would make the case that his arm strength is diminishing.

Rivers is making bad throws when his receivers are not open. He's making some good throws but the bad throws are costing the Chargers.

The stats say the Chargers ran for 103 total yards, but the go to back Ryan Mathews gained only 3.2 yards per carry, 17 attempts which yielded 54 yards. The lack of the running game is putting pressure on Rivers.

Defensively the Chargers did OK, giving up two touchdowns and a pair of field goals. Bucs QB Josh Freeman passed for 210 yards on 14 of 20 completions. But they contained Doug Martin on the ground, holding the rookie to 68 yards on 19 carries after he rushed for 251 yards against Oakland last week. Martin did reel off a 42-yard pass reception. But in total the defense has held up its end of the bargain.

As for the future of Turner, believe it or not this team is right in the thick of the early division race, still. So likely Turner will be given the chance to prepare and coach the Chargers next Sunday against division leading Denver. The Broncos are now 6-3 after defeating Carolina on Sunday. A loss against Denver might do it though. A lot of that has to do with the thinking of Dean Spanos, who many have said is not apt to make a change midseason.
You must log in or register to reply here.
Share:
Facebook Twitter Reddit Pinterest Tumblr WhatsApp Email Link
Top Bottom