2022 hopefully not harpooned Padre Season, Tale of the Whale by Bob Melville

Hader does it!
Reactions: Fender57

Jesus that was close.
F

soto saved the day with that catch.
Reactions: Gill Man

It's a GREAT sign tonite that Snell was so good. If he pitches like that from here out we have a great shot. The downside is tonite the offense reverted to crap again.
Reactions: Faded Blues

Faded Blues said:
soto saved the day with that catch.
Click to expand...

Yeah I was gonna say he gets a gameball for that. That's not the first great catch he's had to save the day either....I think he did it against the snakes too. He can help us on D as on O. He got a single tonite...more than I can say for most of the padre hitters. Manny was a real disappointment tonite....no words for Bell....jeebus.
Reactions: Faded Blues

minus stammen lmao........yes he definitely needs to be subtracted. lololol
Reactions: Faded Blues

Can I come out now? I feed off the Forum's reports.
Very superstitious I'll mess it up. These guys are buckled in.
Reactions: Faded Blues and Gill Man

now that we are on a 5 game roll that momentum can carry into multiple games.....let's win tomorrow to sweep and keep it going. We are gonna be in great shape for the WC if we can keep this up.
Reactions: Faded Blues and Fender57

Gill Man said:
Yeah I was gonna say he gets a gameball for that. That's not the first great catch he's had to save the day either....I think he did it against the snakes too. He can help us on D as on O. He got a single tonite...more than I can say for most of the padre hitters. Manny was a real disappointment tonite....no words for Bell....jeebus.
Click to expand...

Is Manaea going to show up as a spot reliever?
Reactions: Faded Blues

Padres O was MIA but Mikolis was outstanding tonight, not as good as Snell but he had the Pads off balance.
Reactions: Gill Man and TTK

Gill Man said:
minus stammen lmao........yes he definitely needs to be subtracted. lololol
Click to expand...

Yeah, I don't get why he's back on the team. Must be the Clemente award. Oh well, he's a mop up guy.
Reactions: Gill Man

Harryo the K said:
Is Manaea going to show up as a spot reliever?
Click to expand...

I think Manea is starting against Colorado. I imagine he’s gonna be a bullpen lefty in the playoffs.
Reactions: TTK

Harryo the K said:
Can I come out now? I feed off the Forum's reports.
Very superstitious I'll mess it up. These guys are buckled in.
Click to expand...

yes but just briefly...then go back in your shell lmao. that one was a nailbiter .......snell was dominant. Very welcome to have that , this was what we thought we were getting in him. Only issue is hopefully the O is not reverting to that crap we were so frustrated with. They need to come out tomorrow and break out again, maybe Melvin needs to get on them again.

TTK said:
Yeah, I don't get why he's back on the team. Must be the Clemente award. Oh well, he's a mop up guy.
Click to expand...

The Clemente Award is a total bullshit reason to keep him on the roster but I don’t see any other logical reason, he is finished and should be pounding down cold ones on his couch.
Reactions: Gill Man

nice huge smile by Hader there at the end of the game.....he's getting comfortable with his new team now. And the replay on that catch by Soto is pretty incredible. Dude nailed it. 10/10.
Reactions: Faded Blues, Fender57 and TTK

Fender57 said:
Padres O was MIA but Mikolis was outstanding tonight, not as good as Snell but he had the Pads off balance.
Click to expand...

yeah true have to give the guy credit. But i'd like to see us break thru on guys like that......we are going to be facing them regularly if we grab a WC. So might as well demonstrate we can at least put up some numbers on them with the little time left in the regular season. We'll have another shot at that against the dogs although by that time that team may just coast and even save arms. I'll feel better if we can hit the better pitchers more regularly ...because if we do and we have 3 top flight pitchers in Yu, Snell and Mus....we can go a long ways. Hoping to see it all come together with some more of those 5-0 games.
Reactions: Fender57

Let's listen to the Redbirds.

That's a cool crib. I don't get the shoe thing though but to each their own.

The redbird that pitched last night is a ex-Friar. Had an 18 win season couple of years ago.

wrbanwal said:
The redbird that pitched last night is a ex-Friar. Had an 18 win season couple of years ago.

This is the Blake Snell the Padres thought they were getting and have for the most part gotten in the second halves of his two seasons with them.

Let’s talk here about what it means for Snell.

Snell knows results are important. He gets the win or the loss and what his contribution to either is all that matters to most observers.

It just perturbs him.

“Everyone says, ‘Cy Young Blake,’” said Snell, who won the American League Cy Young Award in 2018. “That’s all they ever talk about. But I’m way better now than I was then. It’s all results driven. But the pitcher I am today, I’m 1,000 times better, I believe. I know I am. It’s me. I study myself every day. So I definitely know I’m a lot better.”

“Understanding of the game, understanding hitters, it’s all better,” Snell said. “So it’s just the results. I’ll get there again. I’m not worried about it.”

The fastball command that has eluded Snell too often was not an issue last night.

And when he can put that pitch where he wants, with it jumping past batters at 96-98 (and last night almost 99) mph, he is tough to hit. And when he can simultaneously consistently locate his slider near the strike zone, well, he is almost unhittable.

Snell believes in that stuff too.

Goldschmidt recalled somewhat incredulously getting ahead 2-0 against Snell in the seventh inning and having Snell throw consecutive sliders to get to 2-2 in an at-bat that ended with Goldschmidt grounding out on full-count slider.

“Even when we got ahead, he was able to get back in the count,” Goldschmidt said. “… He was throwing 99. He’s not ever laying it in there. But he obviously had his multiple pitches that he could throw in any count to get a strike.”

“I’ll tell ya, that’s got to be some of the best stuff in the league,” Nola said. “The arsenal — the fastball, slider, curveball, changeup — it’s elite stuff.”

Snell got 15 misses on 23 swings against his slider. That is almost twice the MLB average of a 33 percent miss rate against sliders.

“Disappears,” Nola said. “I mean, it disappears sometimes for me. Sometimes it’s like coming in and it just goes — just drops. You don’t know it’s going to go in the dirt, and it does.”

The Cardinals missed on 12 of their 32 swings against Snell’s fastball, almost twice the MLB average of a 20 percent miss rate against fastballs.

“It’s 98 with that type of spin,” Nola said. “It’s off the barrel a lot. It’s a hard pitch to get a barrel on with the combination of the slider that goes straight down. It’s tough pitches to hit. I feel for guys that have to face him when he’s on.”

Snell has never gone more than 7 2/3 innings in his career, but what he did last night was sort of his specialty. It was his ninth time going at least seven scoreless innings while allowing two hits or fewer.

Of those nine, six have come after the end of June.

And that brings up another thing Snell finds tiresome, though he knows he is the one who has to change that narrative.

Snell’s career ERA from March through June is 4.28. From July through October (including the postseason), it is 2.78.

He has been talking since spring training about his plans to remain in San Diego much of the upcoming offseason in order to train with teammates and team personnel with the goal of, in essence, bringing his strong finish in ’22 into a strong start for ’23.

“I don’t expect myself to just be like the best pitcher in the world right away,” he said. “I feel like the game changes so much and you’ve got to understand the hitters. You (have) to learn all this information. … So then my biggest thing is like this offseason what am I going to do differently to have a better start so we can stop talking about it. So that’s my goal is figure out how to dominate from the start, and then we can forget about my slow starts.”
Reactions: Fender57

I was one off on the win streak thing. They've won five this year, but not six. 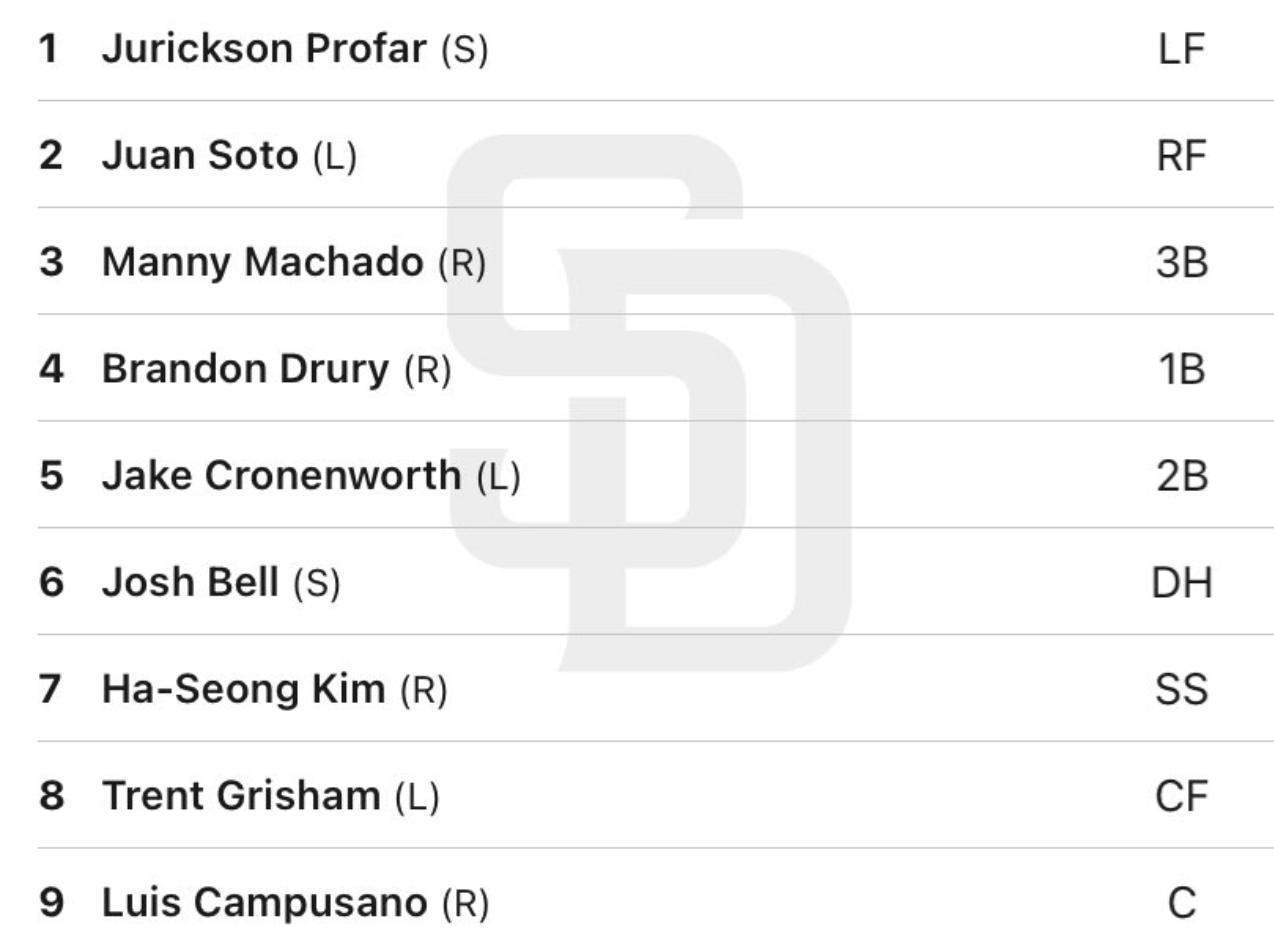